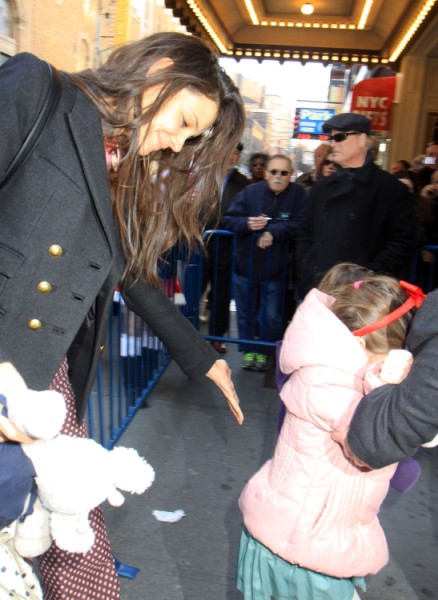 Suri Cruise must have been a very good girl this year (or her parents must have been very bad and feel guilty) because it’s looking like she’s going to have a mighty fine Christmas. She’s getting two houses – one from each parent. I hate the fact that I continue to be jealous of a six-year-old.

The Daily Mail reported yesterday that Katie plans to buy Suri a $25K Victorian playhouse that will be set up in the garden of their family home. It comes with electricity and running water and has 8′ ceilings which means adults can hang there as well. So… Katie bought her a house for the backyard? There’s nothing “play” about it. In addition, Katie is shelling out for an iPad mini and a $10K  Mercedes-Benz toy car. I just want to slap myself right now.

Oh, but hold on there Katie. Good ole Tommy might have you beat. Tom gets Suri for Christmas this year and he’s working on making it a Xenu-rific one. He’s giving her a mansion and a pony! According to Female First, Tom Cruise bought a multi-million dollar home in upstate New York so he can be near Suri. The compound is obviously large enough to house Suri’s pony and her $30K miniature race car he bought her in 2010. “Tom is determined to make this the best Christmas ever,” a source told the mag. “Obviously there isn’t anywhere to keep a pony at Katie’s apartment, so this place is ideal. It also has space for her toys, many of which have been in storage since Katie quit their LA mansion.”

Damn. Katie might have been able to win with the playhouse but there’s just no stopping a pony. Ponies trump all.

So are you sensing a little unhealthy competition between Tom and Katie? That’s a lot of expensive shit to be giving a six-year-old. I don’t understand how these Hollywood parents can whine about wanting to keep their kids normal when they turn around and buy them all this stuff? Again, am I jealous? Yes, but that still doesn’t mean this is healthy.

How surprised are you that Tom got his daughter for Christmas? Suri Cruise was reportedly with Tom in London for Thanksgiving so I thought for sure she’d be with her mom for the holidays. Is this the deal they have? Katie has sole control of Suri during the year but Tom gets her for the major events? Would you make that deal? It seems harsh at first but I could consider it. What’s a couple holidays when you get your daughter all the time?

Are Katie Holmes and Tom Cruise spoiling Suri this Christmas because they feel guilty over everything that’s happened or is this just how they are with the little princess?