Is Scientology Keeping Tom Cruise Away From Suri Cruise? 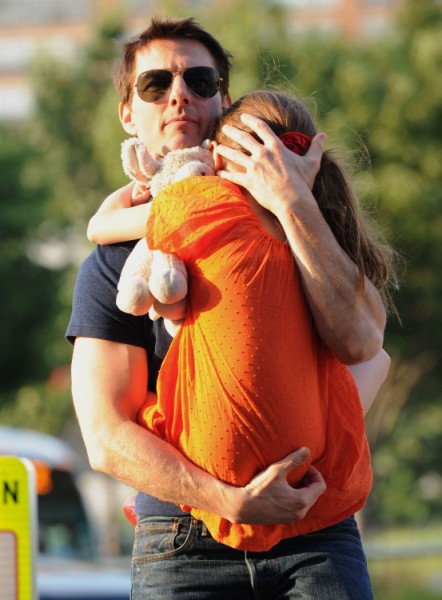 Tom Cruise hasn’t seen his daughter in over 50 days. His people say he’s filming and that he talks to her over the phone constantly. We’ve already been through this. Tom is a worker. His career means the world to him and he’s doing everything he can to get back in his game. Interesting enough, rumors have been running wild that he’s even been reconsidering his high profile role in Scientology because of all the b-tch slaps Katie Holmes gave him this year which ultimately led him to lose full custody of Suri Cruise. Scientology knows Tom has been taking a beating for it, and in an effort to keep its fallen favorite son, the religion has been p-ssing off a lot of its members by granting Tommy all kinds of perks and having contact with Suri is a major one.

“They have already bent the rules for Tom,” the former president of the celebrity center, Nancy Many, told RadarOnline.com. “If Tom was any other Scientologist, including lesser celebrities, he would not be allowed to continue seeing and maintaining communication with Katie or Suri, because they are no longer in Scientology. So far, because of who he is, Cruise has spent time with Suri, which has already upset the parents and children of existing Scientologists who can’t talk to their loved ones. If he is supposed to be a Scientologist, why don’t the rules for every other member apply to him? When every other person that I have known of leaves Scientology, which Katie did without speaking of it directly, they are instantly shunned. By rejoining a Catholic Church right afterwards, she made a very public statement of rejection.”

Naturally Scientology was going to give Tom allowances. He’s the face of the church. If he goes down, they all go down. If he’s not happy then that’s a problem. I was thinking about what he needed to do to boost his image. Besides date Cameron Diaz and leave Scientology, Tom needs to be with Suri. When that little one gets papped wrapping her monkey limbs around him in public, people remember that Tom’s not a crazy robot but a doting, indulgent dad. And we like that Tom. So why is he staying away? London is not that far from NYC! He can easily make the choice to come home on weekends instead of partying all night with various “mystery” women. I can’t decide if it’s just Katie that’s keeping Tom Cruise away or if Scientology is leaning on him to separate himself from his old home life. But that can’t be the case, right? Radar’s sources say the church is bending the rules for Suri. The church wants Suri. She would be a huge achievement! So he’s staying away for other reasons and it just feels weird.

So what is Tom doing? It seems like he’s stuck in some sort of limbo. He’s angering Scientologists because he’s ignoring major edicts but he’s still an odd bird to the non-scientologists who find his behavior crazy and off-putting. What do you think he should do? Does he have to pick a side or can he continue to straddle both worlds? Is he just playing the game until he can get Suri back for good? Those chances can’t be great if he waits so long to see her in between movies. She’s six. Phone calls can only do so much. Does Katie Homes know that? Because it seems like Katie is the major road block between Tom and Suri – not Scientology. Is that fair?