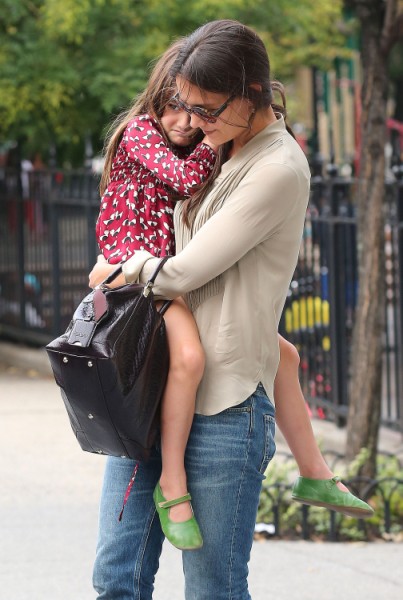 The six-year-old, who reportedly is having all sort of problems since her parents split this summer, was inconsolable after her father failed to join her for her first day of real school. Up until this point Suri has been home-schooled so this was a pretty big day in the little tyke’s life but she only had her mom, Katie Homes, to share it with. Tom’s currently filming (and partying) in London and hasn’t seen Suri in over a month.

“What little girl wouldn’t be crushed?” a source told In Touch magazine, via Entertainmentwise. “The fact he never showed was hurtful.”

But there was a method to his madness. Tom was worried his crazy mug would incite a media blitz and ruin the first day for all the other children. Well, it probably would have so that’s a pretty good excuse. It doesn’t seem like Katie’s buying it though. “Tom doesn’t want to disrupt other parents and students at the school with his presence, which means he very well could slip in and out via a back entrance. Katie doesn’t want Suri to suffer because of their divorce and both parents are truly putting the needs of their little girl ahead of their own feelings.”

For Suri’s sake, I hope this story is complete bullsh-t. The poor kid is going through so many changes! It seems like Katie is doing a pretty good job of being there for her and helping her acclimate but this is still got to be rough. But maybe Tom will start to make more of an effort in the future. There’s a tunnel! The school put one up so Suri could get to school without paparazzi all up in her grill. Embarrassing? Sure. Any more embarrassing than having Tom Cruise as your father? Probably not.

Tom knows he’s getting hit right now for being a dead beat dad so he had his people issue a statement to E! News yesterday saying: “He loves Suri and is a constant presence in her life. As in the past, when he’s shooting in a foreign country, he has to rely on daily phone calls. He calls Suri every day — sometimes twice a day.”

From what I’ve heard, this is really no different than how it used to be when Tom and Katie were together. Tom is a worker. The only difference is Katie used to bring Suri to him and he life wasn’t tabloid fodder… as much. Now, everyone is watching his every kooky move, and if he wants to see his kid, he has to take all the steps. It’s a draining lose/lose situation. Katie Holmes keeps looking smarter, right? She’s put him in a position to fail. But seriously, doesn’t Tom have enough money to buy the Concorde and get to NYC in three hours? Why is that out of the realm of possibilities. See? He’s damned if he does and damned if he doesn’t. If he spends time in NYC he’s trying to steal Suri away. If he stays away and works, he’s a sh-tty dad. Katie Holmes is good!

Do you think Tom’s excuse for missing Suri’s first day of school was reasonable? Is he just in a lousy position?