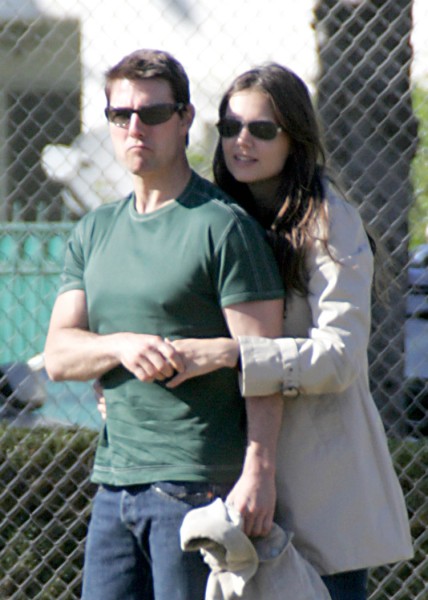 So if you haven’t heard there’s a new scandalous Scientology book out that the Hollywood Reporter excerpted a couple days ago. Naturally, there’s tons of crazy Tom Cruise craziness in it so everyone’s excited as all get out. Dude, canNOT catch a break.

Pulitzer Prize-winning writer Lawrence Wright wrote Going Clear: Scientology, Hollywood, and the Prison of Belief and he’s thrilling us all with his tales of Nicole Kidman blacklisting, Tom Cruise/David Miscavige bromances and just how Katie Holmes got tangled up in this hot mess.

It’s long but if you have the time you should definitely check out the excerpt. What’s news to me is that Tom and Nicole were on the outs from Scientology for a time and Miscavige, desperate to keep Cruise close and as a central figure of the religion, started a PR campaign against her to Tom. He labeled her “a gold digger who was faking Scientology,” whom the church branded a “suppressive person.” Apparently the book goes on to state that despite the way Tom treated her, Nicole even helped scout out Katie Holmes to be his next wife. Why the hell would she do that? If Miscavige turned everyone against her and Tom blindsided her with a divorce, why would she help find him a new piece? Was she so happy with Keith Urban at that time she didn’t even care? But she has always stayed quiet on her involvement leading many to believe she hasn’t always been as innocent with Scientology as we maybe wanted to believe.

Another hilarious bit? Tom’s ego. It’s out of control and only egged on by Miscavige. His delusions of grandeur ever ran to the White House. Tom allegedly said. “If f–ing Arnold can be governor, I could be president.” Beautiful.

I know we shouldn’t believe everything we read but you just want to believe this, right? The fact that Miscavige had a field of flowers built because Tom and Nicole said it was a dream of theirs to run through one is TOO crazy to make up (and yes, that happened).