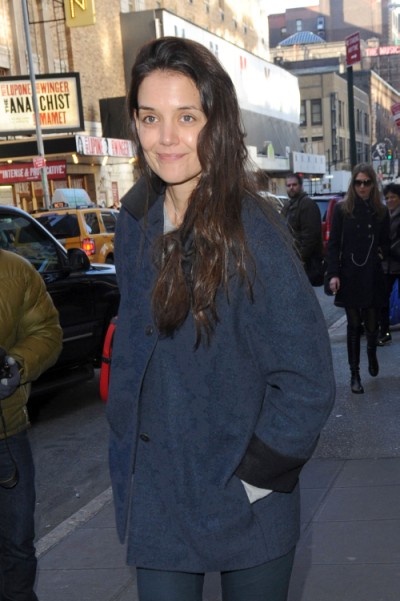 Ugh, another sad sack Katie Holmes story. Someone needs to slap some sense into her PR people because this has gone on long enough. The pendulum has to swing back to the Wonder Women Katie Holmes. Having said that, this new freedom vs. dating story is a little better than the Katie Holmes/Valentine’s Day story from yesterday. I can get behind the fact that Katie is hesitant to get into the dating pool because Tom Cruise ruined her for other men much more than the idea that she’s going to gorge herself on chocolates on Feb. 14 because she misses her pint-sized svengali.

Still, this is what we’re dealing with today so let’s get into it. Radar Online reports that Katie is drunk on freedom. She’s super happy hanging with Suri Cruise and being in charge of her own life that she’s keeping all boyfriend potentials at a distance. She’s apparently uber cautious about bringing dudes in too close.

This is Radar so… whatever, but there’s probably some truth to this. Who doesn’t love their freedom after they get out of a long-term relationship? And Tom was controlling as all hell. I’m sure it’s nice walking around without Scientology minders following her every move. I’m actually positive he still has people following her (this is Tom after all) but she probably doesn’t know it half the time. And besides, it’s only been what? Six, seven months since the great flight? It’s going to take time to open up. I’m sure Patti Hearst didn’t start dating immediately after her captivity either. So I’ll go easy on Katie because I so want her to make a good decision. I can’t wait to see who she comes up with. I’m sensing more of a power player than an actor. Or maybe a politician? She could easily be a politician’s wife. She’s got the Stepford thing down.

Who do you want to see as Katie Holmes’ boyfriend? One thing we all know for sure, he’ll be tall.