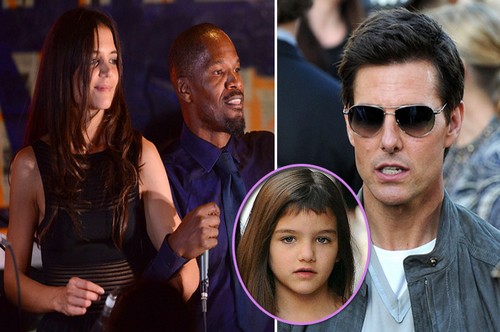 Earlier this week the rumor mill was on fire with reports that Katie Holmes and Jamie Foxx are an item on the DL. As speculation swirled Jamie issued a comment saying that the rumor was crazy but the truth is these two really are smitten with each other, they are just desperate to keep it private. Jamie is considered to be one of Tom Cruise’s close friends and he would likely go through the roof at the very thought of Jamie hooking up with his ex.

According to the Oct. 29th print edition of National Enquirer Katie worries that Tom will retaliate using their daughter Suri. That is her biggest reason for wanting to keep things quiet. The thing is they can deny it all that they want but that doesn’t change the obvious. Katie has been spotted leaving Jamie’s NYC hotel and chauffeured home by his driver at the crack of dawn. Jamie has also spent quite a bit of quality time at Katie’s apartment in recent months and my guess is that they aren’t playing Tiddly Winks with Suri!

Do you believe Jamie’s denial? Or do you think where there’s smoke there is certainly fire but these two are trying to keep it under control? Will Tom flip out if they come clean and admit that they are together? Has enough time passed for Katie to be able to move on with a mutual friend or is this still an area she shouldn’t venture in to? Do you think either Katie or Jamie was looking for revenge? I tend to think that’s not the case here and that they simply click. Tell us your thoughts in the comments below!