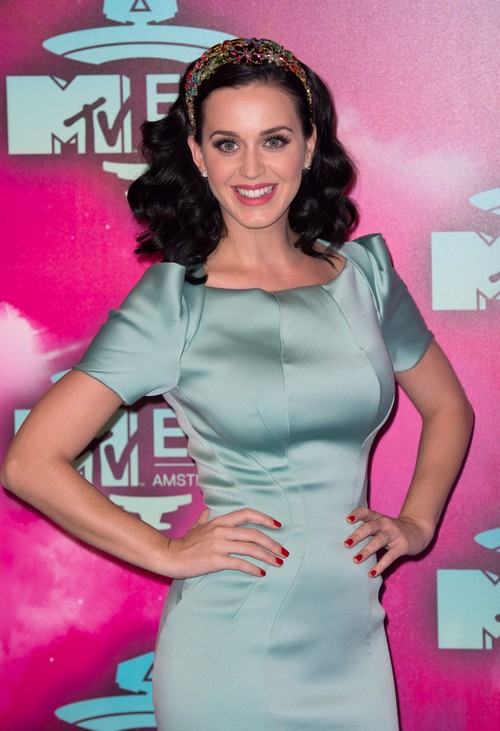 Has anyone else noticed a difference in Katy Perry‘s behavior recently? She’s seemed a lot more… demure in her recent public appearances. In fact, compared to the likes of Miley Cyrus at the MTV EMA Awards, she seemed downright matronly. So what’s the cause for the change?

Well, some astute observers have noticed that Katy might have been wearing an engagement ring at the MTV EMA Awards red carpet, which could mean that our long-suffering pop star has finally gotten engaged to her beloved boyfriend John Mayer. Of course, this is not the first time that Katy would be married, considering she divorced first husband Russell Brand a couple of years ago. But since then, she’s publicly gone on the record about how much difficulty she had with Russell during their marriage, and how much happier she now is with John. I mean, she definitely threw Russell under the bus there, but maybe second time’s the charm?

Of course, this is all rumors and speculation. Katy turned up to the red carpet of the EMA Awards wearing a form-fitting blue Zac Posen dress and a sparkling engagement ring on her ring finger – of course people were going to talk. If it is an engagement ring, it’s definitely a beautiful one, and if it’s not, Katy’s definitely playing mind games with the media. Especially since just a few short weeks ago, a source told E! News that an engagement between Katy and John was ‘inevitable‘, since they were ‘perfect together‘.

What do you guys think of the engagement rumors? Is Katy engaged, or is she just messing with us? Let us know your thoughts in the comments.