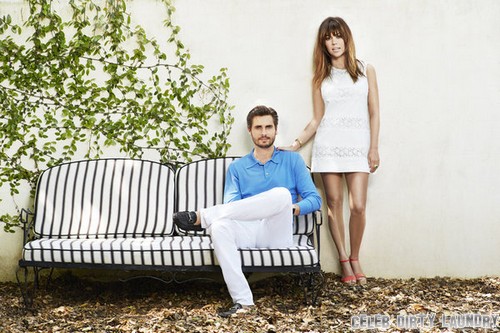 Tonight on E!  KEEPING UP WITH THE KARDASHIANS continues with another new episode called, “Papa, Can You Hear Me” On tonight’s show Bruce is finally forced to deal with his hearing loss. Meanwhile, Scott hears about a woman with cancer who wants to meet him.  Did you watch last week’s season 8 episode 3?  We did and we recapped it here for you.

On last week’s Kim suffered a health scare while dealing with her divorce. She went to the doctor and they suspected she might have appendicitis, but the doctor did not want to operate.  Meanwhile, Kris and Bruce got the whole family involved in their disagreement over whether or not to have a gun in the house.

On tonight’s show some random woman on the Internet has Scott on her bucket list, as in – he is the person she most wants to meet before she dies, huh?  We might finally get to the root cause of Bruce Jenner’s bad hearing over all these years. According to Bruce, who finally visited the ear doctor after many complaints about his hearing, he can’t hear as well in the high pitch as he can in the low pitch.  Khloe welcomes a new puppy to the family, and Kris worries she might have a stalker.

RECAP: The whole family is at dinner and Bruce is hearing has depreciated so much that it is driving the family crazy.

Scott and Kourtney head to an antique shop and find a stuff cat, Scott says it looks like Kim’s cat Mercy. Kourtney calls Cici who has cancer and tells her that she wants to get tested for bone marrow. In the background, Scott is goofing around and Kourtney doesn’t appreciate it.

At Kourtney and Scott’s house, Kim is there and Scott calls a restaurant where Kris is having lunch and pranks her.

Bruce is watching the TV so loud that Kris cannot concentrate and she is upset that he won’t accept the fact that he has a hearing a problem.

Scott is out with his friend Benny to look at watches when the phone rings and it is Kourtney, she wants them to visit Cici but Scott really doesn’t want to.

Back to Kris and Bruce, the television is loud that Kris says you can hear it in San Diego. Bruce is frustrated, he knows that he cannot hear as well as he used to, so what.

At Brandon and Leah’s studio, Kim drops by for a meal; they start talking about Bruce’s hearing problem. Kim thinks that Brandon should be the one to say something to Bruce, maybe he will listen to him.

At home, Scott keeps getting this tweet about a woman that wants to meet him, she has it on her bucket list.

At the Jenner house, Brandon goes over to see Bruce to talk about his hearing problem. Bruce admits that he has a problem and obviously he has to go get checked, he just hasn’t done it and thinks the family has too much about it. Brandon tells him that he doesn’t want him to be stubborn about this.

Kourtney takes Scott along with Khloe to go wig shopping for Cici. Scott doesn’t last long, he just can’t face this issue and would rather hide.

Khloe has a new dog, Bernard Hopkins aka B Hop and she has brought it to her mom’s house. Bruce says if he pees on the floor she is dead. Meanwhile, Kris tells everyone about her stalker Todd Crane, who she really doesn’t know is actually Scott.

Bruce is at the hearing doctor and getting tested. His hearing test shows that he has a substantial hearing loss and would benefit from a hearing aid. Also, the doctor thinks he should have an MRI on his brain.

Scott is going to Paris for fashion week and Kourtney asks him if he will stop by and see a certain someone on the way. Scott says he is not good to talk about death and not sure if he is good to be around someone like that. Kourtney tells him that he needs to deal with it, even if it is awkward and uncomfortable.

Bruce tells Kris that he went to the ear doctor and his hearing is not as good in the right ear; he may have a tumor but it is rare.

Scott is in Ohio, he is nervous and gets anxious when he is around people he doesn’t know. He walks up to the house, rings the bell and a woman answers, her name is Josie. Scott gets comfortable, he finds she has a king’s chair and sits himself down in it. Scott is surprised to see a picture of himself on the wall, Josie talks about her cancer, she is un-operable and her cancer is now in five places. Josie doesn’t know if she should do aggressive chemo again. Scott doesn’t know how to make this woman feel better, but he really doesn’t know how.

Josie’s daughter’s say that they have too much fun with their mom to lose her. Scott says that his dad is sick as well and only has a few years to live. Seeing Josie confront her illness really makes Scott face how sick his dad is. Josie says that a lot of people ask why she picked him to be on her bucket list, she says that when she saw the Oprah interview she knew there was a heart in there.

Bruce wants to change his hair, so he forks through it and everyone hates it. Kris starts talking about her prank calls from Todd Cranes, Kim is so surprised that this has been going on for so long. Kris just doesn’t get the purpose of this guy keeping to call her and send her presents.

At Josie’s house, a whole bunch of friends come over and they are so optimistic and positive. Everyone does a shot for Josie, Scott included. Scott loves her energy, she brightens up the room.

Scott sits down with Josie and he wants to give her one of his Rolex watches. Josie is so shocked, but Scott is more thankful that he met her than she is that she met him.

Scott cuts the cake and says that he doesn’t know if he did it properly because he is not used to hard labor.

Back at the doctor’s office, Kris shows up to support Bruce. The pictures are just starting to come in, the doctor tells them that he ordered the test as a precaution.

Scott is in the limo leaving Josie’s house and calls Kourtney, tells her that it was life changing because she had such an amazing outlook on life. It totally made Scott think about the whole thing with Cici and he is sorry that he was not wanting to be there for her. Scott changed his flight coming home so he can spend some time in Vegas with Kourtney and Cici.

Kim and Khloe show up at the doctor’s office where Bruce and Kris are and he is surprised that everyone is there. The test comes back and Bruce is clear, he only needs an open fit hearing aid.