Keeping Up With the Kardashians Recap 6/9/13: Season 8 Episode 2 “Enough Is Enough” 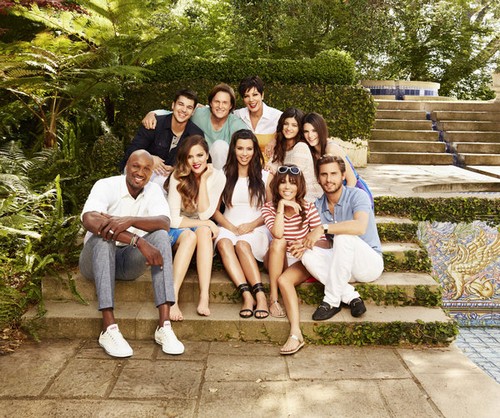 Tonight on E!  KEEPING UP WITH THE KARDASHIANS continues with another new episode called, “Enough is Enough!” On tonight’s premiere episode called,  after some nasty tabloid rumors about Kris surface, Kim and Khloe step in to defend their mother. Did you watch last week’s season 8 premiere?  We did and we recapped it here for you.

On last week’s show the family was overjoyed about Kim’s pregnancy, but Kim’s surprising behavior makes them wonder if she felt the same way. Bruce and Kris wondered if Bruce should get a space of his own and Scott tries to convince Kourtney to accept a backdoor deal.  Kim revealed the sex of her baby with Kanye West.

On tonight’s show Brody tries to open up to Bruce about their past problem.  It seems Brody is jealous of Dad Bruce’s relationship with his sisters.  Brody thinks Bruce is a good father, he just was not a good father to Brody.  Khloe and Kim come up with a plan to help their brother Rob lose weight.  After some nasty tabloid rumors about Kris surface, Kim and Khloe step in to defend their mother.

RECAP: Lamar got his teeth whitened, Khloe and her sisters start talking about Rob and all the weight that he lost. Lamar says that Mason has his own live teddy bear.

Bruce’s son performs with his band and he is really happy to have his dad there. Bruce’s ex-wife Linda is there; he says that life got really complicated with her and that is why they divorced. Bruce is disappointed that Brody is not there, he is in Australia.

At Kim’s house she gets a call from her brother Rob who says that he is mad at not being taken seriously just because he is overweight.  Kim really wants to help him be the best that he can.

Kourtney is with Khloe in the car when she gets a call from Kim, she is so pissed off because their father’s ex-wife claims to have a diary and she is threatening to publish it. Kim feels bad for their mom, it is hurting her feelings. Kim wants them all to go over to the house and make their mom feel better.

At the Jenner House, they find Rob there for a visit. Kris is having an anxiety attack, she can’t wrap her head around what this woman is doing. Kris says that she never claimed to be the perfect parent, but this woman is crossing the line. Kris feels like the damage is done, but Kim wants to get a lawyer.

Kim goes an weighs Rob, he is 221 pounds; she goes on to do measurements next. Rob thinks the numbers don’t add up because Kim is f*cking moron; he has trouble accepting that he gained so much weight. Kim has made an appointment with her trainer, Gunnar Peterson, for Rob to start training. At the gym, Kim starts to bike ride and gets a text from Rob, he’s not going. Kim leaves him a message and tells him this is so rude.

Bruce is at the beach Brandon, Leah and Brody, Kendall & Kyle. Brandon resents Bruce because he was never there for him. After lunch, the girls walk off and Brody tries to tell Bruce how he fells, Bruce tells him that it is not the time to talk about it.

At Khloe and Lamar’s house, Kim walks in and tells her that Rob flaked on her. Khloe says that he has done the same thing to them; she tells Kim where Rob is at some BBQ restaurant and Kim heads over there. Kim walks in and calls Rob “Reliable Rob”, she asks him if he is having fun stuffing ribs in his face. Rob tells her that she works out too early; Kim tells him that she is seriously disappointed in him.

Kylie is driving the van, very irresponsibly with an ice cream in one hand when she tells Kris that her friends sometimes ask her if her mother beats her. Kris is really upset and starts to cry.

Brody talks to Kim about his feelings about Bruce, she tells him that families are crazy and there is a lot that he probably doesn’t remember.

Kim went for a massage and tells Khloe that you get stretch marks if you scratch yourself. Kim and Khloe discuss using reverse psychology on Rob; make him so sick of eating fast food that he doesn’t want any more.

Kim and Khloe are on a set, getting all made up and discussing what is going on with there mom when Khloe calls her because they don’t know where she is and Khloe says, “we just wanted to know where you are because you are too old for an Amber alert”.

Rob walks into the kitchen and finds Kim with a whole bunch of cheese burgers, chilly cheese fries and pizza. It took nothing to convince Rob to pig out. Kim waddles upstairs and leaves Rob to eat even more.

The next day at Kim’s house, she finds Rob in the kitchen eating cheese burgers and fries that were left over from the night before. Rob says that he is enjoying his life and eating whatever he wants. Kim doesn’t think she can help him, she tells him that when he is ready he can help himself. Rob says that he can’t wait to hit the gym the next day and guarantees Kim he will get where he wants to be.

Kim brings Khloe to her Private Investigator; Kim tells him that his father’s ex-wife keeps selling information to the tabloids. He wants to open her up, look at her background and see if they can find any interesting tidbits about her.

Brandon and Bruce are putting around in the yard and they start talking about Brody. Brandon says that their is some risidual stuff left in Brody and it is time for them to have a conversation .

Kim has info from her PI Jake, the woman was first married at 15, she has been married 5 times and she has file bankrupt twice.

Bruce is spending time with his kids at a go-kart race track and Brody didn’t show up; Rob suggests that he call Brody and find out where he is, be the bigger person and go after him.

Khloe, Kim and Kourtney visit their mom at the office and tell her that they have brought their attorney and want her to meet with him. He starts by telling them that they have enough to go after the woman.

At Brandon and Leah’s house, Bruce walks in and finds Brody there. Bruce is ready to take a chance and speak to him, to make things better. Bruce says that it was a divorce and many times he had to back off because of her. Brody tells him that it was tough not having a dad around and Bruce says that it was tough not being there. Bruce tells him that the biggest disappointment in his life has been missing out on things in his kids life, he can’t take those years back but he has been trying to learn from it. Brody tells him that he is not mad anymore; the agree that they have both missed out on a lot and need to work on their relationship.

Rob is excited, he had a talk with Lamar and he has convinced him to start exercising. Kim walks in and announces that the woman has been served.

Kris got a call from Todd; they have been trying to serve the papers to the woman and she has been running. Kim is thrilled that this whole mess is behind them.