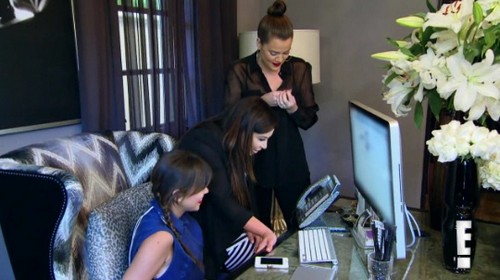 Tonight on E! KEEPING UP WITH THE KARDASHIANS continues with another new episode called, “Kris’s Mother-In-Law.” On tonight’s show, the family plans to surprise Kris with a final Todd Kraines prank. Did you watch last week’s season 8 episode 11? We did and we recapped it here for you.

On last week’s show Kris disagreed with Kendall’s plan to escape their hectic house and find a beach house for the summer, while Brandon and Brody started work on Bruce’s backyard putting green behind Kris’s back. Khloe worried that a sexy photoshoot for Lamar might turn embarrassing. Kim got word that her sister is planning a sexy photo shoot involving latex and acrobatics.

On tonight’s show Kris worries about a visit with Bruce’s mom, Esther, because they’ve never had much of a relationship in the past. Meanwhile, Kim takes desperate measures to make Kylie’s fashion blog, and the family plans to surprise Kris with a final Todd Kraines prank.

Oh joy. Here we go with another fabulous episode of Keeping Up With the Kardashian’s. I seriously threatened to do a shot every time Kris throws herself a pity party but I would have been bombed ten minutes in. Bruce’s mother is 86 and her third husband just died. Bruce is trying to get Kris to come with him to visit her and she flat out refuses. Why? Because Ester has never liked Kris. She thinks she is a trash bag and so Kris’ feelings are too hurt to journey to Idaho to support Bruce.

Kim is completely obsessed with Kylie’s Tumblr. No really, it is all she’s talking about. Kylie’s Tumblr is like, a representation of her soul and it’s just amazeballs. Kim’s life is obviously fabulous when as she supposedly is in love with Yeezy and is expecting her first baby she can only focus on Kylie’s Tumblr.

Bruce decides to compromise and suggest bringing his mother to them. Kris agrees to it but the claws totally come out. She mentions how he has only his mentioned his mother to her a dozen times in 23 years. Obviously Bruce isn’t great at his family connections- just ask Brody and Brandon.

Kris goes to lunch with her friend Rhonda and tells her how awesome Robert Kardashian’s parents were to her and how Bruce’s mother is basically a bitch by comparison. Rhonda tells Kris to make amends with the woman but Kris is heading into this reunion as the victim of course. She hopes Ester will see that she’s not the enemy here.

Kris is having the Jenner side of the family over for dinner and as Bruce drives Esther home he asks her to talk to Kris. Esther admits she has never made much of an effort with her but says she’ll try to pull her aside for a talk. Meanwhile Kim realizes that Kylie is borrowing her clothes and if photos of her and Kanye aren’t good enough for Kylie’s Tumblr than Kim’s clothes are too good for Kylie’s body. Kim goes into Kylie’s closet and takes a ton of her clothes back.

Kim and Esther didn’t get a chance at the party so Bruce picks his mom up at her hotel and brings her to talk to Kris. Kris is nervous about it because in 23 years she feels that this woman never wanted anything to do with her and now a talk is imminent. Esther manages to build that bridge and thanks Kris for being good for Bruce. When he finds out that they got along Bruce is near tears and he is thrilled that they finally bonded. Tune in next week for more Keeping Up With the Kardashians.