Keeping Up With the Kardashians Recap 8/25/13: Season 8 Episode 13 “The Kardashian Chainsaw Massacre” 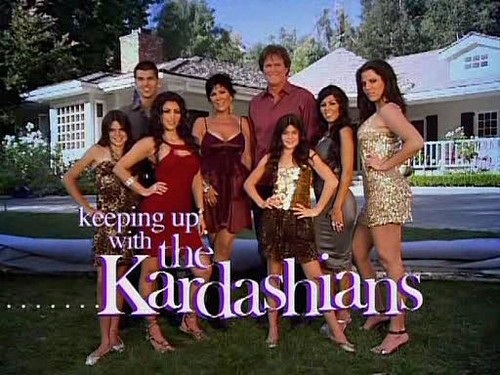 Tonight on E! KEEPING UP WITH THE KARDASHIANS continues with another new episode called, “The Kardashian Chainsaw Massacre.” On tonight’s show,Bruce takes some of Jimmy Fallon’s jokes a little too personally. Did you watch last week’s season 8 episode 11? We did and we recapped it here for you.

On last week’s show Kris worried about a visit with Bruce’s mom, Esther, because they never had much of a relationship in the past. Meanwhile, Kim took desperate measures to make Kylie’s fashion blog, and the family planed to surprise Kris with a final Todd Kraines prank.

On tonight’s show Rob shocks everyone when he takes up chainsaw art in Khloe’s backyard. Meanwhile, Kim plans to get back at her judgmental family by secretly attempting to feed them placenta, and Bruce takes some of Jimmy Fallon’s jokes a little too personally.

The show begins with Rob, Khloe and Kim hanging out. Kim is researching how some women eat their placenta. Kim feels that she might need to do that. Khole tells her she is turning into a little Kourtney.

Kim and Khloe are at Khloe’s house when Kim discovers a ton of empty candy wrappers in the garbage. The know it is Rob’s and are worried about his emotional eating. Kim calls it not normal.

Bruce, Brandon, Leah, Kendall meet for lunch. Kendall quizzes Brody about his new girlfriend. Bruce gets a text about doing Jimmy Fallon’s show. They talk about how he hates Jimmy because of all the Bruce face jokes. Bruce reveals that he actually told Jimmy to stop with the face jokes. Bruce decides he is not going to do Jimmy’s show.

Later there is a family meal at the Jenner household when Khloe brings up how Bruce did the heimlich maneuver to save one of his kids. Kim asks the chef if he has ever cooked a placenta. The chef says not but that his wife did eat hers. Kim learns there are cookbooks on how to cook it. The conversation grosses out everyone except Kourtney who says she will eat Kim’s., gross.

Rob and Scott go car shopping but take the scenic route to check it out. They end up at some wood-carving place where Rob wants to get Khloe a Buddha. Scott asks about lessons and encourages Rob to take a lesson and he agrees.

At Kim’s house Kourtney and Kim talk about how close-minded everyone is about Kim wanting to eat her placenta. She wants to feed them placenta without telling them. Kourtney learns you can buy placenta and Kim is now all about getting back at them for being so close-minded.

Rob has his wood-carving lesson beginning with sawing. The teacher tells him he has a knack for chain saw wood-carving art. He wants to do it at home.

Kourtney and Kim get ready for their placenta dinner. Scott walks in as they are marinated the placenta. He learns the girls had it flown in and the whole family is going to eat it. Scott is grossed out as they are seasoning it. They order him to keep quiet about it to the family.

At Khloe and Lamar’s Rob has all this chainsaw wood carving stuff delivered to the house. He tells Khloe he bought it to do his chainsaw art. She wants to ask questions but is worried he will snap.

Bruce stops by Kim’s house to talk to her about doing Jimmy Fallon’s show. He tells her why should he give Fallon the satisfaction of being on the show. Kim reminds him that Jimmy is not the first or only one to make fun of Bruce and that if he doesn’t go on the show it will make Bruce look like he can’t face Jimmy. Kim tells him to go on the show and have a good sense of humor about it.

Jonathan and Khloe discuss Rob’s chainsaw art and how he practices right outside her window early in the morning. Khloe doesn’t want to give him grief because it is the first thing Rob has been passionate about something artistic. Kourtney says Rob can come stay with her and do his chainsaw art.

Rob, Malika and Khloe meet for lunch so Khloe can talk to him about moving his art project to Kourtney’s. After telling him what a great job he is doing she shares that Kourtney wants him to do it at her house because she is so happy he is doing something. He takes it very well and agrees to move it. Rob looks sad and Khloe asks him why he says he isn’t sad. The two get in a fight when Rob gets mad thinking that Khloe is insinuating something is wrong with him. She asks how he is and Rob gets very mad at her.

Kris is surprised to learn Bruce is actually going on Jimmy Fallon. Bruce tells her he decides to do it but Kris is worried he will be a loose cannon and fly off the handle at Jimmy. Kris is worried that he will embarrass the family.

Rob moves his chainsaw art to Kourtney’s house. Despite Kourtney being worried about it she is trying to support Rob’s project. She tells Rob how proud she is of him. Meanwhile the noise is preventing Scott from doing his work in the office. He then gets worried about the neighbors.

Later the chef arrives to Kourtney and Scott’s to prepare the placenta. He is shocked to learn it is from a human. Kim arrives later to see how the cooking is going, Jonathon tags along with her and Kris and Bruce show up as well. They tell the family it is brisket. Scott sits back as everyone digs in. Kris begins to question what the meat is. Jonathon and Kris tell Kourtney she may have overcooked the brisket. After telling the family how proud she is that they tried something new Kourtney and Kim make the big reveal they all ate placenta. Everyone is grossed out by the joke that was played on them. Bruce calls Kim and Kourt sick.

After finishing his bear Rob takes it inside Kourtney’s house and she finds a place for him. Kourt is super supportive and appreciative of Rob’s chainsaw art.

Bruce makes his way to do Jimmy Fallon’s show and enlists the help of his pal Jeff Dunham a comedian for some material.

Rob calls Kourtney to borrow the bear he gave to her. She goes to find it and learns that Scott threw the bear out because he thought it ruined the whole vibe of the entry way. He says he threw it in one of the bins and the gardener came and took it away. Kourtney is none too happy with him. Thanks to Scott’s actions Khloe, Scott and Kourtney have to recreate the bear he did. It does not go well so they decide to go online and order one. They have it shipped overnight to give to Rob.

Kris calls Bruce on his way to Jimmy’s show. Kris tells him to not get in Jimmy’s face. She tells him to laugh and have a good time. The producer is mad at Bruce because he won’t go over questions. Bruce wants control of the interview leaving Kris really worried.

The bear arrives and it is way smaller than Rob’s bear. Khloe is worried that Rob will freak out. Kourtney comes up with a lie to tell Rob that they sent his away to get stained and the wrong one was sent back to them. Rob arrives with a Buddha for Khloe. Kourtney tells the lie to Rob who doesn’t believe her. She finally comes clean and he is fine but annoyed that they feel the need to baby him. Khloe tells him about the candy and the emotional eating. Rob tries to reassure them he is just fine. Khloe does not believe him though.

Kris is still complaining about the placenta eating. Kourtney reveals in confessional that it was not really placenta but brisket. Someday the family will learn the truth. They all gather around to watch Bruce on Jimmy Fallon. Kris is mortified when Jimmy says Bruce will not come out of his dressing room. Finally he comes out and Bruce thanks Jimmy for having him on the show and says he is going to rip him apart. Bruce makes a joke of the face jokes with Jimmy getting lots of laughs. Kris does not find it funny that Bruce has hijacked the interview. The interview ends with the two men hugging. Khloe and Kourtney are proud of Bruce.