Keeping Up With the Kardashians Recap 9/1/13: Season 8 Episode 14 “Backdoor Bruiser”

BY Dorothy Gale on September 1, 2013 | Comments: one comment
Related : Keeping Up With The Kardashians, Reality TV, Recap, Television 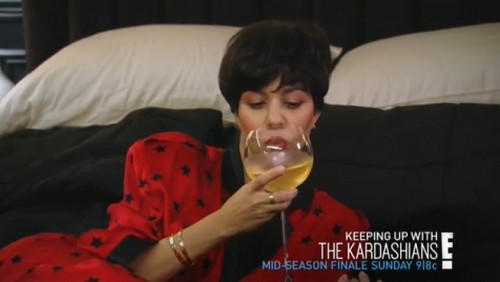 Tonight on E! KEEPING UP WITH THE KARDASHIANS continues with another new episode called, “Backdoor Bruiser.” On tonight’s show the kids attempt to embarrass Bruce by digging up his and Kris’s old sex tape.  Did you watch last week’s season 8 episode 14? We did and we recapped it here for you.

On last week’s show Rob shocked everyone when he took up chainsaw art in Khloe’s backyard. Meanwhile, Kim planned to get back at her judgmental family by secretly attempting to feed them placenta, and Bruce took some of Jimmy Fallon’s jokes a little too personally.

On tonight’s show Khloe tries to figure out what’s causing her memory issues. Meanwhile, Kris is confused when Kendall starts spending more time with the Jenner side of the family and the kids attempt to embarrass Bruce by digging up his and Kris’s old sex tape.  Bruce lets the kids know that they erased the tape right after they made it.

RECAP: Kourtney is instagraming cuffs that Scott took out and Bruce thinks it is terrible and some things should be private.

Khloe is with Kourtney and Kris; they are talking about how she doesn’t have a good memory.

At dinner, Khloe reveals that she did a photo shoot for Lamar to spice things up. Bruce asks Khloe if she really thinks she should really be sharing this information at dinner. Kris pipes in that she made a video with Bruce, but he doesn’t think it was a sex tape because they didn’t do multiple positions. Kris tells them they erased it and it was over twenty years. Scott is shocked, Bruce is always passing judgement on him and here he is banging someone on camera.

Bruce is now horseback riding with Kendal and Kris walks in with stripper heels; a bit too overdressed to be at the stables. Kendal goes to meet Kris near her vehicle and tells Kris she wants a pickup truck, Kris tells her that she will get over it in a few days.

Khloe brings Kourtney to a chiropractor, Kim is there as well but she just watches. Khloe discuss with the chiropractor that she always has memory loss, he attributes it to a car accident that she had when she was sixteen.

Back home, Kourtney and Khloe raid Kris’ old photo albums to see if they jog Khloe’s memory. Khloe finds it really irritating and sad that she doesn’t remember a lot of her past.

Kourtney and Scott start talking with Rob about Kris and Bruce’s sex tape, they want to find it and Scott wants to use it as blackmail. The three of them head to Kris and Bruce’s bedroom and start going through all their stuff. Kourtney is annoyed that they can’t find the tape and Kris gets home, they have to stop snooping.

Kris is out shopping with the girls and Kendal finds it is hard being out with them because they have different tastes.

Kourtney has an idea, she wants Scott to dress up with her as Bruce and Kris and make a sex tape; Kourtney thinks it will be so amazing.

Khloe wants to go see a specialist to see if something is wrong with her because she is so forgetful.

Kendall tells Kourtney that she wants a pick up truck and Kourtney runs right to Kris and tells her. Kris gets upset and Kendall tells her to chill, it is her own money and she can do whatever she wants to. Khloe is at the doctor’s office to figure out what is wrong with her. The Neurologist assesses her and says that usually a memory loss is because of dementia and Khloe is freaked. The doctor tries to test Khloe, he guarantees that she doesn’t have dementia but thinks a hypnotist may help her with her memory loss.

Kourtney and Scott are all dressed up for their sex tape.

Kylie is with her brothers, she loves being with the Jenners because they are really outdoorsy and she loves it. Kourtney stole her mother’s nightgown from 1989, Rob is producing and Khloe is filming it.

Kourtney goes to see the hypnotherapist to help her with her memory. The therapist gets her talk about when she was a teenager and she admits her feelings are confusing. Kourtney remembers having memories about her uncle OJ, her father was on OJ’s side and her mother on Nicole’s side.

Kendall is out with Kris and they are having lunch together.

Most of the family is together sharing a meal and Kourtney tells everyone that they are going to have a short screening of a video they found from 1994. Everybody watches and Bruce gets so mad that he walks out, he thinks it is actually him. Kourtney goes up the stairs after him and tells him it’s not real, Bruce finally gets the joke and returns to watch the video; everyone has a good laugh.