BY Roberta Ferguson on May 30, 2013 | Comments: one comment
Related : John Travolta, Kelly Preston 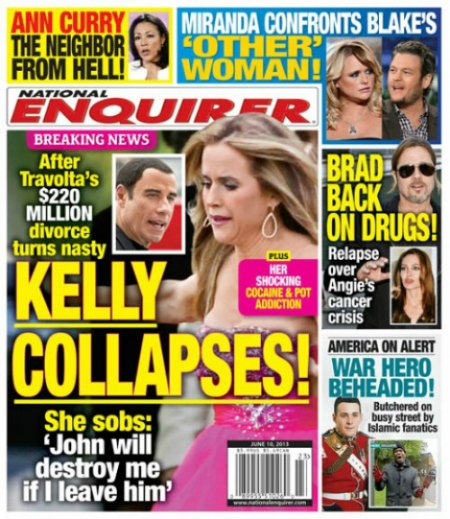 We have all heard the reports of something being terribly wrong in the marriage between John Travolta and Kelly Preston. Basically, I think we’ve all been waiting to hear the news straight from these two that he really just likes men, their religion is stupid and there was something fishy about their son Jet’s death. Would any of that really be shocking?

John and Kelly are once again featured on the cover of the latest issue of the National Enquirer. The tabloid reports that Kelly has collapsed after having some issues with a cocaine and pot addiction. Interesting that they would report that she has an addiction, which we really don’t think she has. If she did, wouldn’t she have already been in rehab? Or is that against the Scientology stuff. Those Scientolo-weirdos would detox her like a boss, no?

Still, their divorce is apparently turning nasty with a sobbing Kelly saying that he will destroy her if she leaves him. What kind of secrets is John keeping for Kelly? Hit the comments and leave us your thoughts!