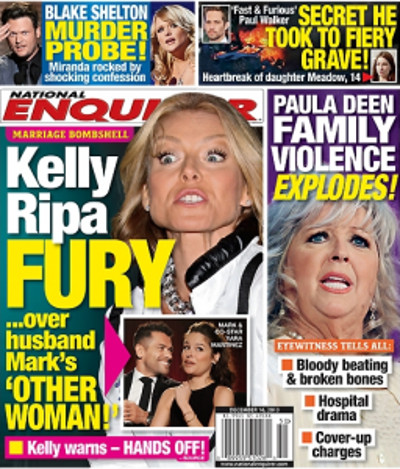 The magazine doesn’t report that anything has happened between them. Yet. But they’re predicting — and hopeful — that the flames of desire will catch soon and destroy yet another celebrity marriage. Mark and Yara play a couple on the show and seem to be doing some pretty believable and hot acting — hot enough to start some chatter. “Mark and Yara are pretty hot together,” the mag says, “but he’s got to remember he’s also ‘Mr. Kelly Ripa’ and better watch his step.”

What do you think about this story? Do you think Kelly’s husband would ever be crazy enough to cheat on the fun-loving morning talk show host? The world just might come after him if he thought about doing that, so I suggest he stay faithful. By the way, National Enquirer really loves themselves some Kelly. Not too long ago they reported about how she’s suffering from an incurable brain disorder. She seems to have survived that malady.