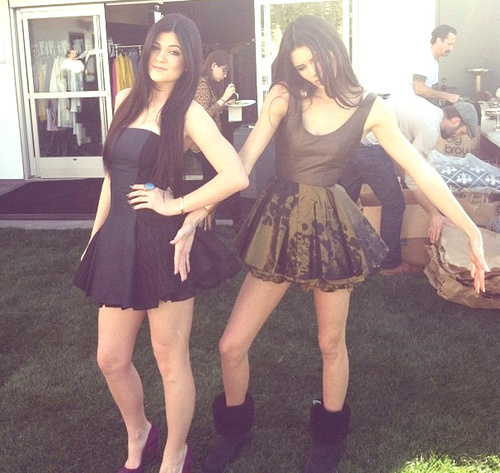 Even the very best teenagers are smart enough to look for opportunities to get away with stuff when no one is paying attention and that thought alone totally sums up the situation with Kendall and Kylie Jenner this summer. The dynamic duo has been partying hard – unsupervised in Kris Jenner’s Malibu beach house while the rest of the family is knee deep in scandal.

Apparently, Kris Jenner is a more effective momager doing serious damage control than she is mother paying attention to what her kids are doing – and the state of her Malibu property proves it. According to the Aug. 19th print edition of Star magazine the neighbors are in an uproar because there is ’round the clock partying on Kris’ property, with teens passed out in the sand and beer bottles and half smoked blunts littering the ground.

Also despite being only 16 and 17 both Kendall and Kylie have had a slew of sleepovers with various guys. Kendall is dating Julian Brooks and he is basically living with her for the summer. Kylie is Miss Non-committal and ping pongs between a harem of guys that include Jaden Smith and Lil Twist, who is said to roll the best blunts in town.

In other words it’s most parents worst nightmare and Kris is purposely ignoring the problems in favor of obsessing over her failing talk show. She supposedly left Kourtney Kardashian in charge over the summer but she doesn’t live in Malibu and has enough problems of her own right now thanks to Michael Girgenti’s paternity suit.

Where is Bruce Jenner in all of this? Sources say he has given up on parenting because Kris steamrolls over his decisions and neither Kendall nor Kylie listens to him – so he’s always on the losing end of the fight. He instead chose to walk away, move out and now splits his time between golf games and flying his toy airplanes.

If Kris doesn’t make her teens a priority now their behavior is only going to get worse. Will she intervene and lay down the law or does she only care about her own success? Perhaps Kris is so debauched as to not even notice that there is a problem.  After all this is the same woman who produced and marketed daughter Kim Kardashian’s sex tape. Tell us your thoughts in the comments below!