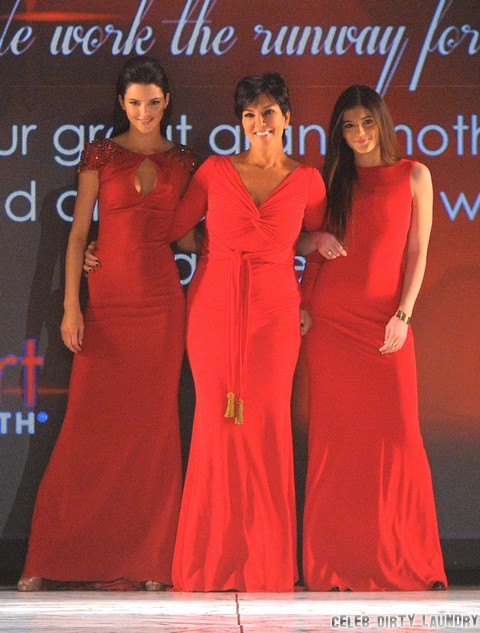 Kendall and Kylie Jenner left fans of The View far from impressed yesterday when the two joined their momager Kris Jenner as she co-hosted the show. Their appearance made it look like Kris was just using them to boost their career as models, though Kylie hasn’t even got the looks to be one, but whatever – though the 15-year old may not bring in as much money as her older sister Kendall, she’ll still make enough to satisfy her money-hungry mom.

After yesterday’s show aired, people didn’t hold back to call the three Ks “dull” and “boring” while one person said: “What the hell did I just watch? If this is how they act in interviews, I certainly wouldn’t want to watch their reality show … Why is Kris bringing that young girl on stage.. isn’t she like 14? She should be in school, not pursuing a modeling career”.

Another added: “No doubt that Kris has two beautiful kids, but why is she now pimping their careers? Looks like Kanye West finally told her to back off from managing Kim’s career, now she needs someone else to get the big bucks from, and these two innocent girls are being dragged into it.”

Kendall and Kylie didn’t let the criticism stop them from sharing how much fun they had on the show alongside Joy Behar, Whoopi Goldberg, Sherri Shepherd and Elisabeth Hasselbeck. But the harsh comments just go to show that people are really starting to get tired of seeing the family on television. The season premiere of Kourtney and Kim Take Miami had 1.6 million people watching, which is a 2.2 million decrease from their last season of Kourtney and Kim Take New York – where the marriage drama between Kim and Kris Humphries unfolded.

Well, it’s fair to say that these girls better start working now because their reality show success is starting to take a tumble. Maybe that’s why Kris is pimping out her kids so desperately… she’s aware of the ratings going down and worries what she’ll do when the money stops rolling in. That would explain why she’s now planning to sell maternity and baby clothes under the ‘Kardashian Kollection’ label.

What did you make of Kendall and Kylie’s appearance on The View: good, bad, okay?