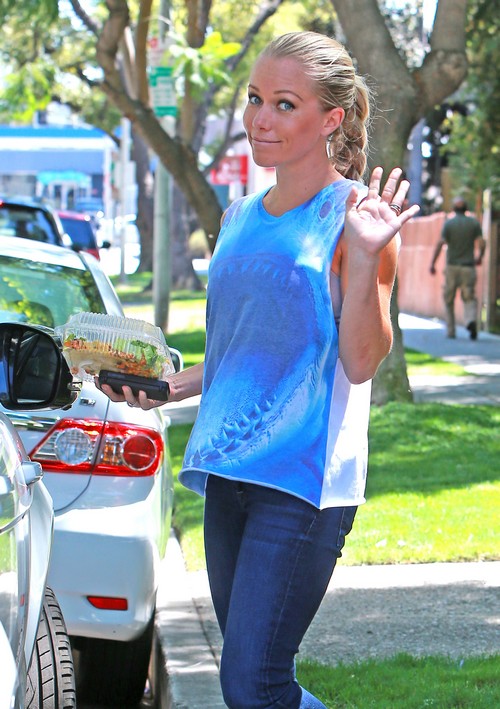 Kendra Wilkinson Baskett has allegedly been disowned by her family after allegedly failing to tell them about her alleged second pregnancy.

The rift began when Kendra, who never seems to get along with anyone but her twerking reflection and her sometime football player husband Hank Baskett, forgot to tell her mother, Patti Wilkinson, that she may or may not be knocked up again. Patti Wilkinson, who always seems to be in a state of frustration over her daughter’s choices, heard the news through the grapevine, called Kendra, they had words, and Kendra, who probably forgot about that commandment in the Bible that says to honor thy parents in order to have long life upon the earth, supposedly told her mother to ‘go die‘.

Kendra’s younger brother Colin Wilkinson took to his Twitter page to announce his opinion that Kendra is an ‘inconsiderate bitch,’ and they no longer have a relationship, and that everyone should cease and desist asking questions about her because he will no longer answer them.

Rumor has it that Kendra was told to get pregnant in order to save her reality TV show, Kendra On Top. The things people will do to avoid getting a day job! Having seen Kendra on The Girls Next Door and a couple of episodes of her first spinoff show, I have a feeling all of this is for ratings. Kendra probably is pregnant and just forgot to say anything because she’s not exactly the sharpest knife in the drawer, so the publicity machine is getting everyone all riled so they can have something dramatic to air, and then they’ll have everyone kiss and make up for the cameras as a season finale, or something.

I could be wrong, but after watching more than one ‘reality’ show where everything is obviously scripted (which is why I no longer tune in for any reality show), I can’t help but think it’s all a grab for ratings.

What do you think? Is this a genuine conflict or mere fakery for the cameras? Do you care at all, or have you had it with pseudo-celebrities like Kendra stealing headlines from the real stars? Sound off in the comments below.