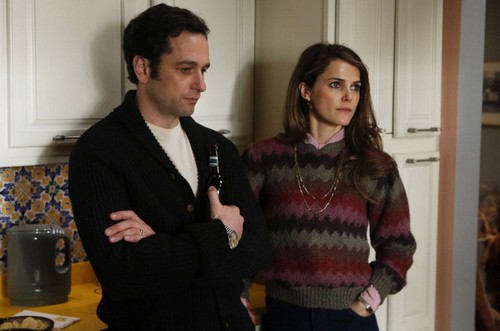 Is Keri Russell getting cozy with her on-screen partner, Matthew Rhys? The two star on The Ameriocans as Soviet KGB agents posing as a married couple and it looks like some of that touchy feelyness has carried over into real life. Keri’s handlers confirmed a few weeks ago that she and hubby, Shane Deary split last summer which would seem to indicate that the actress might be on the hunt for a new man. Now we’re hearing that Keri and Matthew have been spotted out and about together looking like they are a whole lot more than just friends.

According to Page Six the two have already met each others’ families and that things are going very well. It’s not the first time that a romance bloomed on-set but I have to wonder if they perhaps got together before Keri and Shane split up. Maybe the sparks flying between Keri and Matthew are what were the catalyst to her marriage ending. As for Matthew, up until now he has totally embraced the single life. In interviews he has talked about enjoying his freedom, much to the chagrin of his mother.

In 2012 Matthew claimed he had yet to meet the right girl, could Keri actually be it? The two are together in NYC filming season 2 of The Americans. Do you think that whatever romance is brewing is the real deal or is this a quick rebound that has helped Keri to climb out of a marriage that simply wasn’t working? Tell us your thoughts in the comments below!