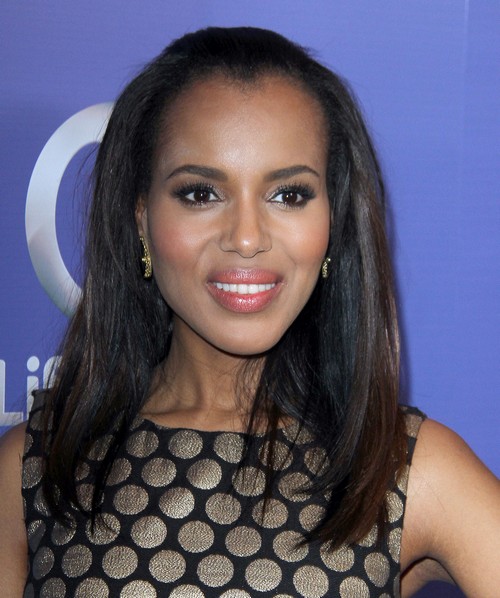 With the new age of the Internet and non-stop public speculation on celebrities’ love lives, it’s become a crazy world for movie and television stars. For people like Kerry Washington, who keep their private life intensely guarded, the public starts to go on a feeding frenzy where they will pick up any rumors and start spreading them like wildfire. It seems to be a trend with most stars who keep their romantic life private [i.e. Ellen Page, Joseph Gordon-Levitt], where the public will immediately assume they’re hiding something and then claim they’re gay.

Kerry addresses the rumors that she’s a lesbian in her interview in The Advocate, explaining, “It’s interesting how much people long to fill in the gaps when someone in the public eye doesn’t share their personal life. I understand their frustration. I like how people will post pictures of me with other women that I adore, hugging on red carpets, and say, ‘See?’ Are we so uncomfortable with love between two people of the same gender that we immediately label it as sexual? But I’ve never been bothered by the lesbian rumor. There’s nothing offensive about it, so there’s no reason to be offended.”

Kerry’s answer is very similar to the answer that Joseph Gordon-Levitt gave a while back, which is a respectable no comment. Kerry’s married, so we know the status of her love life, but to claim that she’s not offended and then add that she was straight would just take away from the whole point in the first place. This way, she makes a point without beating anyone over the head with it, and the public should start learning that stars keeping their romantic life quiet doesn’t necessarily equate to them being gay.