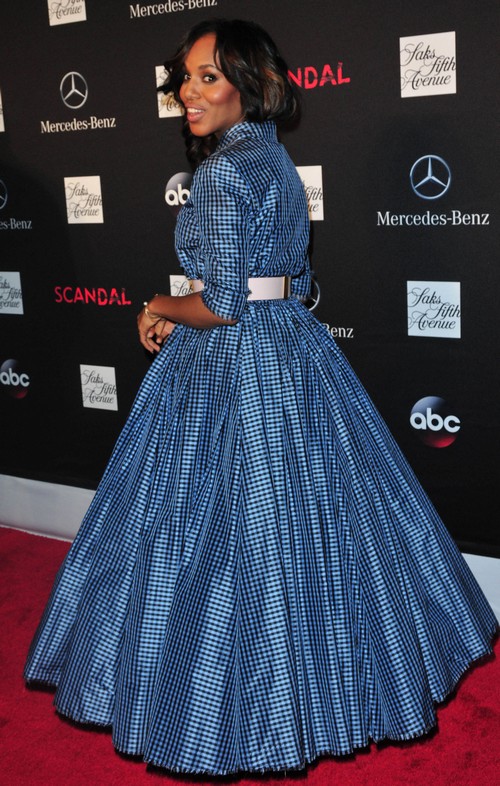 How many of you are super excited to see the premiere of season three of Scandal tonight?  I know I am and so the timing of this nugget couldn’t possibly be any better! Kerry Washington, otherwise known as Olivia Pope on the super hot show, turned up at the series premiere party last night looking quite a bit different than usual. Kerry is well known for her great fashion choices and rarely puts a foot wrong with her typically streamlined style, at least until last night. Her busy dress may have had a belted waist but it also looked like there was the beginning of a baby bump there! And what about her surprise secret wedding this summer?

According to MTO speculation is now running rampant that the newly married Kerry is in fact pregnant! If that’s the case then Shondra Rhimes would have to write her pregnancy into the show, right?? Can you imagine Olivia carrying the president’s baby while his miserable wife seethes?  Talk about storyline gold for everyone involved! What a great twist to weave into the already tangled mess that is brilliantly written and acted!

What do you guys think? Is Kerry headed for motherhood? She has pretty much popped up on every single magazine cover that counts in the last six months so now is as good a time as any to take a breather from interviews and such, don’t you think? Are you hoping for a surprise pregnancy on Scandal? Do you think Kerry’s surprise wedding was prompted by something other than undying love- like maybe a baby? Tell us in the comments below!