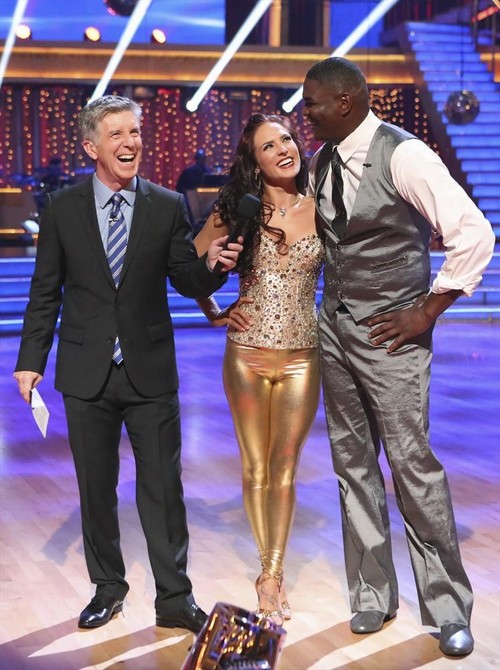 Keyshawn Johnson danced a Samba, on tonight’s Latin-themed episode of Dancing with the Stars.   You can check out Keyshawn’s DWTS bio [CLICK HERE] If you missed tonight’s show you can read a full and detailed recap, right here.

Tonight the celebs danced either a Samba, Jive, Rumba or Paso.  At the end of the night, one couple will face the first nail-biting elimination. The first elimination is determined by combining the judges’ scores from the first two weeks with the public votes from premiere night.

On last week’s show Keyshawn was given a 17/30 for his Foxtrot.  If you missed any of last week’s performances, you can check out all the videos, right HERE.

Keyshawn Johnson and professional dancer Sharna Burgess: danced a Samba.  Keyshawn tweeted the following about tonight’s dance, “My sweet daughter was at practice to take up dancing from Sharna not me, trust that!!! Jennifer wouldn’t let me teach her!!!!”

Judges comments: Bruno said: “One thing is for sure you went for it all the way.  Some of the things you did I don’t think it is legal.  I like you, really.”  Carrie Ann said: “I saw the confidence go way up and you were not lacking any hip action.  A little rough around the edges.”  Len said: “I admire your effort.  For me that was better than last week.  Well done!”

Watch the video below and let us know what you think? Do you think Keyshawn did enough to avoid elimination next week? Sound out in the comments below!