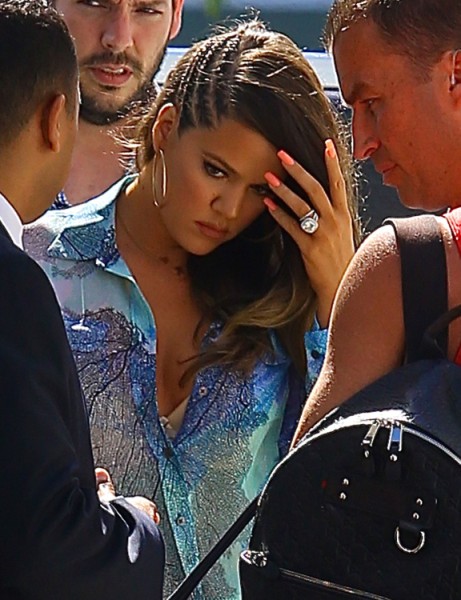 I really wish Lamar Odom hadn’t gone on that paparazzi freak out yesterday. Up until then I dismissed the cheating rumors. They’re coming from Star magazine after all. Who the hell cares what Star has to say about anything? It’s not like it’s the most trusted source. But then Lamar went and started bashing up some camera gear in L.A. and now we actually have a story. Thank God he posed with the fan afterwards. That alone tells me everything is going to be all right… and that Kris Jenner has taught him well.

Despite that, the Khloe Kardashian denials are still coming in full force this morning. Since the story dropped yesterday she’s issued several tweets confirming her love for her Lam Lam and defending his ranting actions. She also claims the paparazzo who Lamar targeted did a hit a run against her brother Rob somehow justifying Lamar’s behavior.

I don’t know if Lamar Odom cheated but I do know the best way to seem like you did is by going bat-shit crazy on a photog. If he did have a year-long affair with that Jennifer Richardson why would Khloe wait to announce a separation? Either she’s hoping to reconcile or Kris Jenner hasn’t said it’s time to divorce Lamar Odom yet. The family is flying high with Kim Kardashian baby news. It doesn’t need anymore drama to grab the front pages. This divorce is better suited for six months from now after the hoopla over North has died down. That’s the only thing I can think of. Khloe and Lamar are essentially done but Kris is spreading out the news so there’s never a lull in the tabloids. But Lamar isn’t following the game plan. He couldn’t handle his shit and now everyone’s in crisis mode. I’m almost semi-interested in where this story goes.

Side note: The Daily Mail referred to Lamar today as a 33-year-old reality star. Poor dude. He’s a legitimate professional basketball player and that’s his title.