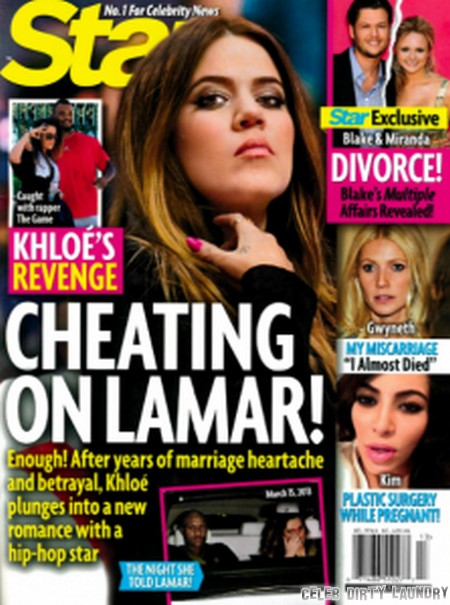 It’s the age-old question. Is emotionally cheating as bad as real cheating? I’m not sure Khloe Kardashian and Lamar Odom think so. Apparently he’s accused her of it and still hasn’t left her which must mean he’s dealing or Kris Jenner hasn’t let him out of his contract yet. I tend to support the latter.

But let’s get to the bottom of this first. According to Star magazine Khloe’s been hanging with rapper, The Game, (a.k.a.  Terrell Taylor) lately because he’s become a fitness motivator for her and her brother Rob. You can teach crunches but can you teach motivation? I’m sorry but Rob’s a lost cause. ANYWAY, apparently Lamar is getting increasingly uncomfortable with how much time Khloe’s spending with the rapper especially since she let it slip one day that he said she had a nice ass. She’s a Kardashian. Commenting on her ass is like commenting on the weather. It’s idle chit chat to pass the time but Lamar was still pissed.

“Lamar thinks Khloe and The Game are more than friends. She will go hours without answering Lamar’s calls, which has never happened before. And she talks about The Game nonstop,” a source told the mag. “That night in the car, Khloe let it slip that The Game told her she has a nice ass. Lamar flipped. He told her The Game is trying to get with her and that she’s cheating emotionally, which she didn’t deny.”

They’ve been married for how long? Three years? So that’s like 10 years in Hollywood time and 20 years in reality TV time so who can blame her? Let he who hasn’t emotionally cheated cast the first stone! I wonder what Kim thinks about this though. Khloe’s getting accused of essentially the same thing she’s accusing Kanye of doing to her right now. Kris Jenner must have felt lazy this week when she was mapping out the tabloid stories so she used the same idea for both couples. I’m not hatin’ Kris. It’s got to be tough manufacturing drama for all those kids each and every week!