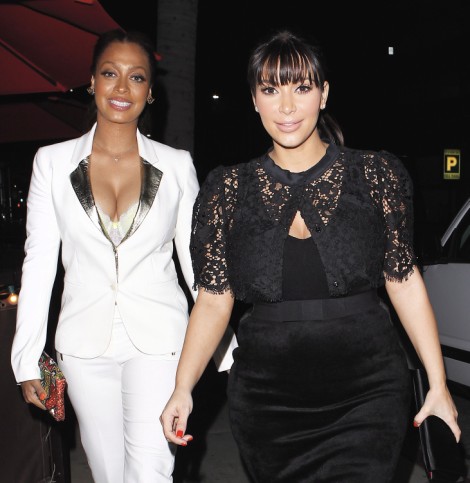 Kim Kardashian’s weight seems to be the only thing the media wants to talk about which is kinda shitty. I get it. But it seems like it’s the only thing her side wants to talk about anyway. Her aunt, Joan Kardashian, has come out of the woodwork to confide to The Sun that the reality star is doing everything she can to keep the weight off and is even considering a tummy tuck now.

“She can have a tummy tuck, which will take care of most of her weight fears. The family’s trying to convince Kim to relax and worry about losing the weight months from now. Other than her belly, which is still rather flat, every part of her body has ballooned. And this is with Kim holding to a strict diet. Imagine if she let herself go?”

Jesus Christ Aunt Joan. Thanks but no thanks. Next time a newspaper wants to talk to you just hang up the phone.

But is it all paranoia on Kim’s end or is baby daddy extraordinaire Kanye West losing that loving feeling now that Kim’s got more to love. According to Radar (courtesy of the National Enquirer), Kim is worrying herself sick over Kanye’s recent lack of attention and is blaming it on her “ballooned” body. “Now that Kim has put on such a large amount of weight, Kanye seems to be busier with his music schedule than ever, and Kim doesn’t think it’s a coincidence. She’s concerned about Kanye cheating, and his disinterested and distracted attitude isn’t helping.”

Hello? Kim it’s not always all about you! He’s pouting because he’s losing his best friend (and he has the biggest ego in the world). I’m sure it has nothing to do with your 65-pound weight gain. There’s that number again. And I still don’t believe it. Yes, in the pics below you can tell she has rounded out just about everywhere but 65 pounds rounded? No way. Maybe she’s gained that much since her Dancing with the Stars days. She was super skinny then. I’d believe that. But I do not believe for one second that she’s put on that much wait since she announced she was pregnant. She’s like 5’1″. She’d be a bowling ball at this point!

What do you think about the tummy tuck? Kim Kardashian makes her money off of her shape and beauty so it makes sense that she’s acting so crazy, right? But is Kim Kardashian worried for all the wrong reasons? Kanye West isn’t going to cheat because she’s fat. He’ll probably end up cheating because she has no personality. What? It’s the truth!