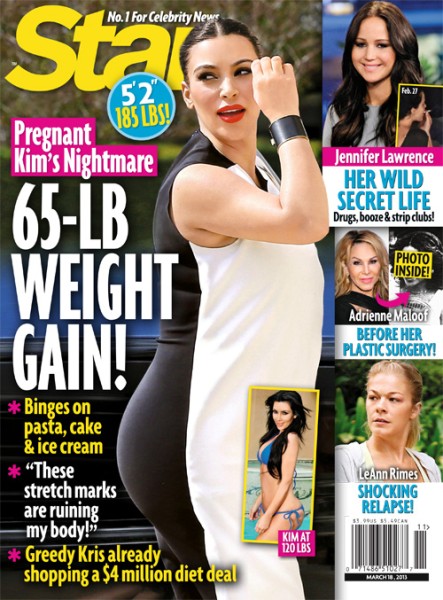 Something tells me Star magazine’s new cover wasn’t signed off on by the Kardashians. With the news that she’s already gained 65 pounds, Kim Kardashian’s much curvier frame explodes all over the front practically spilling over on to the side bar stories. It’s effective but damn it’s a little tough. But apparently it’s all Kim’s fault! What does she expect? According to the magazine she’s stuffing her face with pasta, ice cream and cake while crying over stretch marks. Luckily she has a warm and compassionate mother in Kris Jenner who is already planning on following Jessica Simpson’s lead and feeling out weight loss companies for her monster post-baby body comeback.

Seriously, as much as I’d love to believe Kim’s gained that much already we all know this is shit, right? There’s no way she’s gained that much in five months. The doctors would sit her ass down and give her a talking to – reality star millionaire or not. Nice try on the sensationalism Star but the creativity is lacking on this one.

Also on the cover is Jennifer Lawrence’s reckless ways. Apparently she has a wild and crazy life now since she got caught presumably smoking weed in Hawaii after her Oscar win. Come one! Lindsay Lohan she is not. She won an Oscar one day and was back to work reshooting in Hawaii the next. Surely a weed break is justified!

Then we have cat face Adrienne Maloof. I’m sure she thought leaving The Real Housewives of Beverly Hills would keep her frightening mug off magazine covers but I’d say it’s a little too late for that. They have photos of what she looked like before she had all the work done. I don’t know about you but this is the most exciting part of the cover for me.

And there’s been a LeAnn Rimes relapse!  I’m guessing it has a lot to do with Brandi Glanville’s old accusations of alcoholism and drug use. Why else would she relapse? I thought she was gaining weight and getting healthy? She needs to make up her mind!

So what are you most excited about in this latest issue of Star – Kim Kardashian’s pregnancy weight gain? I just want to see Adrienne’s real face. I can’t imagine what she used to look like but something tells me it’s nothing like now.