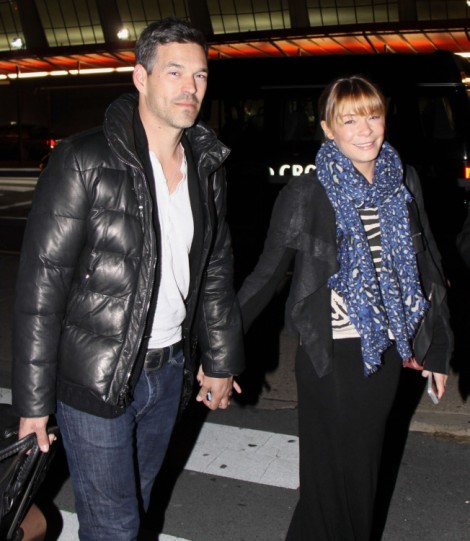 It was inevitable. These crazy biotches were going to run into each other sooner or later. Luckily for everyone, it happened at one of the kids’ baseball games so a major blow up didn’t occur though I wouldn’t have put it past them. The LeAnn Rimes/Brandi Glanville feud can strike at any time! But it wasn’t to be. Despite the fact this was the first time Brandi, LeAnn and Eddie Cibrian were in the same place at the time time since Brandi’s awesomely disturbing book, Drinking and Tweeting, launched, the dysfunction family kept it cordial. How did they manage to do that? They just refused to sit next to, speak or acknowledge each other.

The Daily Mail reports Eddie and LeAnn kept it cool by hiding in the dugout while Brandi sat in the stands with the other parents. Who watches from the dugout? Are LeAnn and Eddie that famous they need to hide or were they just hiding from Brandi? Perhaps Eddie knew he had to keep LeAnn as far away as possible. There are rumblings that Brandi’s book is going to be made into a lifetime movie which is pretty hilarious since I’m pretty sure LeAnn and Eddie met while filming one. So much for network loyalty. It’s one thing to be the other woman. It’s quite another to have a movie blasting it. Apparently LeAnn managed to escape Eddie’s hold by going to the bathroom and, naturally, she had to walk right past Brandi to get there. The women exchanged “icy looks”. How? There’s too much botox going on there to really be the judge of accurate facial expressions. But I’ll go with icy. We’d want nothing else, right? The Mail also made a point to champion LeAnn because of continued healthy figure. She keeps denouncing the pregnancy rumors but I don’t know… those jeans do look a bit tight around the middle. But what the hell is she wearing? If  she’s trying to dispute Brandi’s alcoholic/mentally unstable claims she isn’t doing the best job. Would a sane person wear that ensemble? Just saying….

Did LeAnn Rimes confront Brandi in her own passive aggressive way at the game or is she turning out to be the bigger person? I have a feeling this is only getting started.