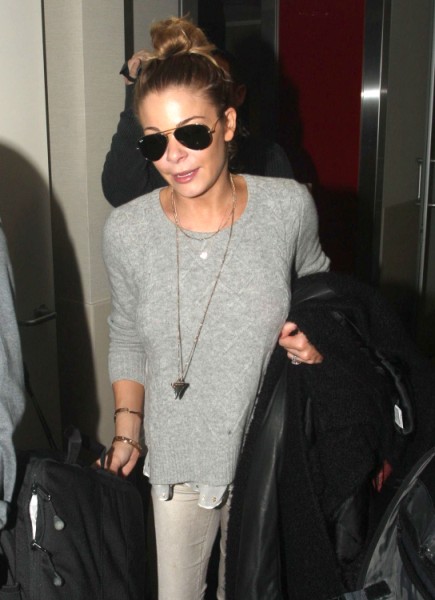 Eddie Cibrian must be going easy on the propecia because sources suggest LeAnn Rimes is pregnant.

According to the latest rumblings, Rimes was spotted in LA on Valentine’s Day look fuller figured and was attempting to cover up her stomach with a baggy shirt. Another clue? LeAnn cut her hair and got her some bangs! Ordinarily I would scoff at such nonsense but Kate Middleton did the same ill advised thing before she announced her pregnancy….

Apparently LeAnn and Eddie have been trying to have a kid for awhile. That sounds weird to me. LeAnn doesn’t seem like the maternal type but maybe that’s because I’ve just thought of her as the homewrecking type for so long. Speaking of homewrecking, I wonder what Brandi Glanville will have to say about this. You know she’ll have something. She’s made it her business to hate this woman. She can’t get all cordial on us now. However, this will be a hard play for the new author. Hatin’ on a woman who stole your husband and broke up your family is one thing. Hating on a woman who stole your husband, broke up your family, married your ex-husband and had a child with him is another. For some reason motherhood tends to clean slates. LeAnn definitely needs it. But if the LeAnn Rimes pregnant rumors are true I wouldn’t expect a detente any time soon. If anything, I’m sure it will get a whole lot more interesting.

Attached – pics of LeAnn and Eddie in late December. As much as LeAnn is in the news it’s hard to get new photos of her. You can see the pregnancy pic in question here. Is that a baby bump? LeAnn Rimes could have just decided to start eating again. It’s been known to happen. You think Kim Kardashian is having a tough time with the baby weight gain… just wait for this one.