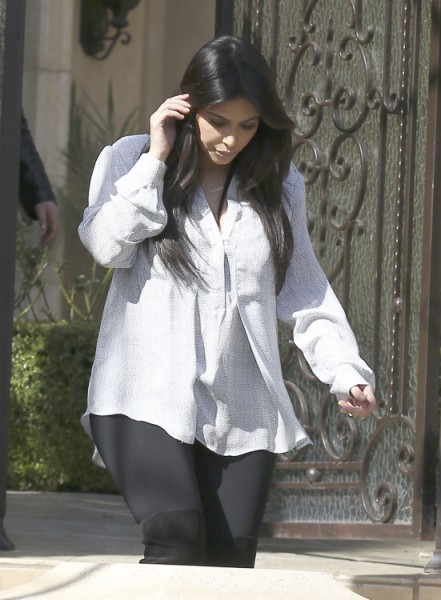 I can’t believe I’m saying this but, at this point, I actually feel bad for Kim Kardashian. Pregnancy weight is scary as all hell at first and I can’t help but feel everyone secretly (and not so secretly) wants to see her pack on those pounds so they can bitch about how lazy she must have been to pack on those pounds. The poor girl can’t leave her house without some of us guessing how much weight she’s already put on (though some of that is her fault because she wears stupid shit). Still, I heard this story about Kanye West and I actually liked him for a brief second. It really sounds like he’s doing a great job as a supportive, daddy-in-waiting.

That’s sweet, right? I’m not sure if it’s the best advice but it’s super cool to have a guy who’s not nagging you about your changing body. And trust me, there are guys like that out there.

Still, it’s got to be tough for Kim who just watched women like Jessica Simpson and new “family” member Beyonce balloon up during their pregnancies. Did you know Beyonce gained 57 pounds? I had no idea. She must have carried it well or hid it at least. I don’t remember many shots of her waddling around at 9 months though. She didn’t parade muumuus all over Hollywood like Jessica. But it’s all about the girl, isn’t it? If I knew Beyonce gained that much at the time I wouldn’t have been worried. Her work ethic is out of control. With all her rehearsing you just knew the weight would pour off in no time. It would be much harder for women like Jessica and Kim to bounce back after gaining all that weight. Kate Hudson isn’t a singer/danger and she gained a ton during her pregnancies but she also had the crazy motivation to work out six hours a day to get it off seemingly in no time. Is that healthy? I have no idea. I’m just giving examples of different women who do different things. But it’s like I said before, Kim is paying Tracy Anderson good money to get her ass back so you know it’ll happen. I’d relax and enjoy the ride if I were her – while she can!

Should Kim Kardashian’s weight gain be a concern? Do you think she’s overreacting? Be honest. Do you kinda like Kanye a little more now?