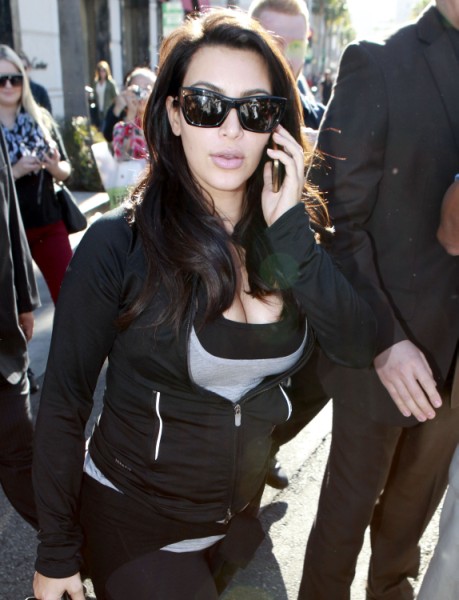 I blame Jessica Simpson for this. Jessica Simpson and her buttered pop tarts and muumuus ruined it for the rest of us. Although it was pretty fun to watch how huge she got, her laziness scared the hell out of new moms who are totally in the dark over what pregnancy will do to their bodies. Case in point – Kim Kardashian. I’ve never seen her go to the gym so much! She’s said before that she’s terrified to gain the pregnancy weight but she’s probably just scared shitless to be the next Jessica Simpson. Jessica Simpson doesn’t even want to be Jessica Simpson on her second go around. But is Kim taking her Tracy Anderson fitness regime a little too far?

There seem to be millions of differing thoughts on this but, as far as I’ve been told, pregnancy shouldn’t stop you from doing what you were doing before. If you were a runner then run. If you played tennis then play tennis. If you were a lazy reality star then, by all means, stay at it. You’re supposed to listen to your body. If something doesn’t feel right then stop, if not, full speed ahead. That’s pretty much the long and short of it. And, interesting enough, I don’t think Kim Kardashian’s workouts involve cardio. I’ve recently done a little research on Tracy’s Pregnancy Project and was shocked to find that her dance cardio isn’t a part of it. I think it’s just all muscle work. Tracy has said in past interviews that she didn’t like the feel of cardio when she was pregnant so maybe Kim’s getting a pass as well. So, sure, she could be going to the gym 6 times a week but when you’re not running intervals or dancing for hours it’s probably pretty manageable. Besides, it seems like Tracy’s just biding her time until she gets Kim after the baby. There will be no Jessica Simpson delay on that one. Kim’s going to lose the weight fast because Tracy has already risked her credibility on it. Stupid decision? Luckily for us, time will tell.

And, really, have you ever seen Kim leave a gym looking wasted? I know, she probably freshens up before she gets in front of the cameras but there are never pit stains, crotch stains or messy mascara streaks. I doubt she’s a balls to the wall kind of girl… in the gym at least.

So you be the judge. Are Kim Kardashian’s weight anxieties putting Kanye West’s baby in jeopardy? Should she tone it back a little bit or are you of the newer mindset that thinks workouts are good for the bambino?