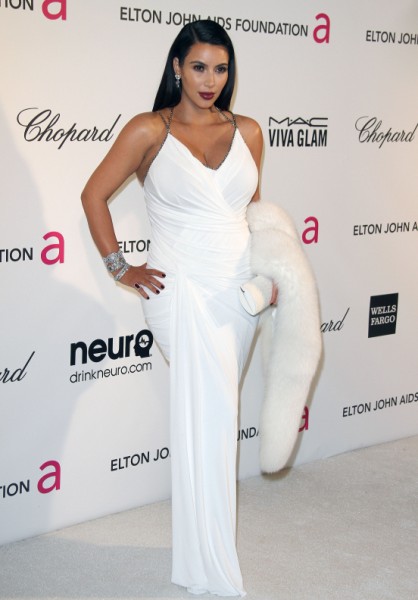 Perhaps all the stress is getting to Kanye West and he should relax for a bit. It can’t be easy being Kim Kardashian’s baby daddy especially since the soon-to-be mother shows up to the opening of an envelope. Did you know Kim made the rounds last night in Hollywood? Of course she did. Biotch refuses to stay home. She wants the whole world to enjoy those massive jugs of hers. Or maybe she wants to make the most of her freedom before she’s stuck with a newborn. I get it but, still… Nigeria, Brazil, Elton John’s AIDS Foundation Academy Awards Viewing Party… stop making Kate Middleton look so bad!

But let’s get back to the baby daddy. At his London concert, Kanye West suffered another quasi-breakdown and no one was off limits from his wrath. It appears his little ego is crushed because of his Grammy snubs and the fact that his bestie, Jay-Z, has a new best friend in the form of Justin Timberlake. Gross. Who’d be jealous of that?

Oh, there was some Taylor Swift hate too. He cut off in the middle of a song to say, “Taylor Swift beat Beyonce at the Grammys? Beyonce be dancing in heels and shit. We need the music business to be evened out and fair. I’ve never won a Grammy against a white artist. I’m motherfucker Kanye West, we can create a human utopia if we try.”

Dude, you need to get over Taylor. He went on with: “The Grammys can suck my dick. I’ve got love for Hov but I’m not down with that suit and tie shit.”

He then went on to rant about his mother, corporate America and artists who sell out. Fine. His little feelings are hurt. He wants more respect for his music and Justin is getting more attention than him. It’s bullshit but I get it. But, seriously, before you run your mouth about corporate America, maybe you should look at who you’re marrying. Kim Kardashian is the reality famewh-re epitome of corporate America ready to sell anything she can put her face and name on.

Where the hell did all this come from? Is this outburst the result of his being stepped over? Not only has Jay-Z moved on but he’s also getting eclipsed by Kim. Is Kanye still a great rapper or is he Kim Kardashian’s sperm donor? Grandpa Buddy knew what he was talking about! There might be way too much ego in that relationship for it to survive.

What do you make of the Kanye West breakdown? Is it just nerves over Kim Kardashian’s pregnancy or could all the (lack of) musical attention be getting to him?