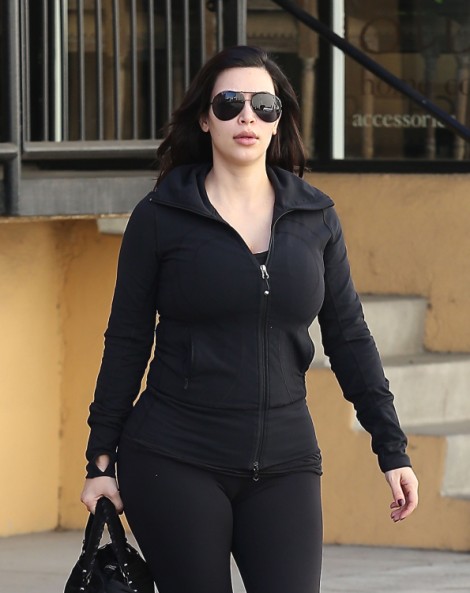 You’re probably wondering why I didn’t use these photos today. I know. I even surprised myself by staying away. I wanted to. You know I did but I think subconsciously I must feel that if I use them or stare at them too much all the amusement and happiness I get out of them will quickly evaporate and that must not happen. Have you ever seen the Youtube video of the baby kitten getting tickled? Remember how you felt the first time you watched it? These photos are like that for me.

And maybe I didn’t want to ruin Kim Kardashian’s day since Kanye West’s family seem to want to do that for me. Well, not really, but someone should take the microphone away from the 97-year-old guy. Kanye West’s grandfather, Portwood Williams (Grandpa Buddy), is on record saying he doesn’t think the Kim Kardashian/Kanye West marriage will last and he won’t even bother attending the wedding (although that probably has more to do with his age and travel than his distaste for all things Kardashian). See, Buddy is one of those old dudes with old ideas about marriage. He was married to Kanye’s grandmother for 72 years and thinks people should take their vows seriously. And, yes, he knows Kim was only married to Kris Humphries for 72 days.

In Buddy’s defense, he’s not just blaming Kim on the potentially bad marriage. He also remarked that no one in Kanye’s family has gone the distance like he has. Kim actually made a good impression on him when Kanye took her to visit him for the first time. “She’s beautiful and just as sweet as she is beautiful — and that’s what I like,” Buddy said. “She was down to earth, she’s rich and those kind of people have got everything. Kanye never calls me and tells me he’s coming, he just turns up. They stayed here, talking to me. They stayed about four or five hours. We had a lot of fun laughing and talking.”

That’s actually really sweet and I’m super surprised cameras weren’t around even with all of Kanye’s protestations. I got to go with Grandpa Buddy on this one though. No offense to the happy couple but does anyone think this marriage is going to last? Track records aside, will Kim and Kanye be right for each for the next sixty years?