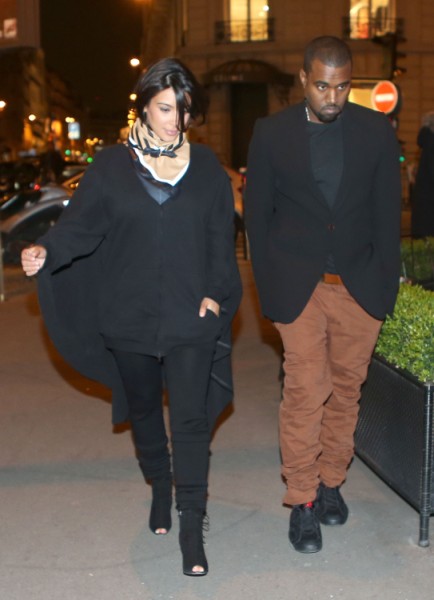 I would. Wouldn’t you? Oh, no… well I still would because it’s the only trump card Kris Humphries holds right now. Hell hath no fury like a woman scorned and we’ve all known Kris Humphries is a biotch for a long time.

This is one of those stories that we really have no idea if it’s true or not. It’s from Now magazine which pretty much assures it’s full of sh-t but it’s too fun not to report on because you could just see this running through Kris’s mind, right? Keep stalling the divorce so Kim Kardashian and Kanye West’s baby is born out of wedlock. Ruin Kim’s vision of a perfect, happy family. Come on, you’re going to tell me Kris hasn’t thought about it… even a little bit?

According to Now, it’s his new motivation for the long-awaited annulment  Apparently Kanye’s dad is a staunch Catholic who really wants his grandchild to have two married parents. Obviously, thanks to Kourtney, the Kardashians are pretty cool with baby daddys instead of husbands.

So do we blame Kris for his unquenchable revenge? Listen, if this is remotely true then sure it’s a dick move. But let’s not forget what Kim did to this poor guy. She begged him to marry her; put his life in front of a camera; dumped him in front of the world; put his basketball career at risk; and I’m pretty sure never gave back the ring.  Oh, and she might also have given him herpes. All he’s doing is making her wait so she can be held accountable for her actions. God forbid. I’m sorry but I’m Team Humphries on this. I appreciate his sticktoitiveness.

Do you believe Kanye’s family is pressuring him to get married before the birth? Kim Kardashian put her dumb ass self in this position but do you think Kris should grow a heart and let her off the hook? Me neither.