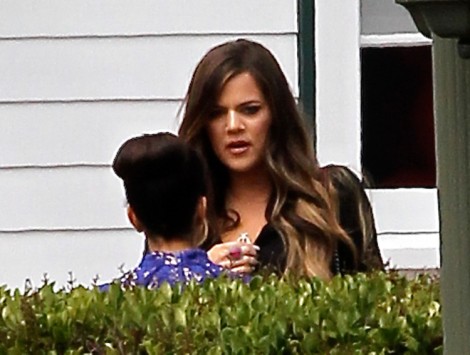 It turns out that Khloe Kardashian is willing to look the other way as long as her man gets her knocked up. That’s the latest coming out of Radar Online this morning. Don’t get her wrong. She’s still mighty pissed that Lamar Odom cheated (reportedly) this past year with a chick from D.C. while on the road but she’s thinking about allowing him this extended hall pass for a little North West of her own. I suppose Khloe’s never heard the advice that babies don’t fix things, has she? Maybe she figures babies change things, and since life is pretty sucky at the moment, it can only change for the better?

“[The cheating allegations] of course bother Khloe tremendously. She has trust issues with Lamar and was absolutely livid when he went to a strip joint earlier this year. However, Khloe still wants to have a baby with him. She feels that once they have a baby together, it will just bring them closer,” a source said.

Let’s blame Kim and Kanye for this misguided thinking. If this story is to be believed, let’s assume Khloe is super sensitive right now. She’s hiding out with her family and most likely overloaded with Kim’s baby bliss. She’s witnessing Kanye be less of a douche bag as he enjoys his little girl. Of course that’s going to turn a head. Of course that’s going to reinforce idyllic attitudes towards babies. Just give it time Khloe! Kanye will be off on his tour in no time leaving a disgruntled and abandoned Kim behind. Then you can judge if babies really do indeed change all relationships for the good! I’m not saying they don’t… I’m just saying having a baby to keep a marriage going sounds very 16 and Pregnant to me. Khloe can do better.