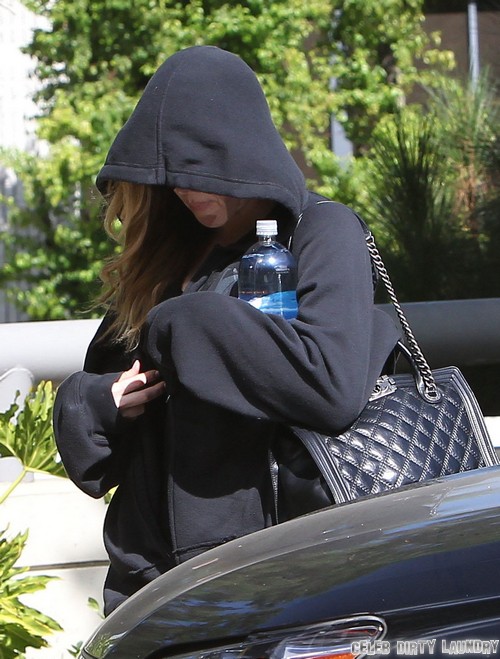 I feel like I should be singing that Boy II Men song. You know “it’s so hard to say goodbye to yesterday” because I honestly am sad over Khloe Kardashian and Lamar Odom‘s marriage right now. Lamar has thrown away his career and his willing to do the same with his marriage.  He’s an idiot!

I understand drugs can be really compelling and it’s probably affecting how he sees people right now but when has Khloe ever been an enemy to him. Within hours of him getting arrested she did a quick public walk through to ensure everyone saw her wedding ring was still on. She basically said I’m standing by my husband after he refused a drug test, he knew he had something in his system, which according to California law allowed officials to take his license away. For a man seen earlier sneaking back home by playing a weird game of peek-a-boo in the back of taxi, he sure got nerve. What’s up with the moving trucks, Lamar?

That is what’s killing me. After everything in which I mean the mistresses, the drugs, and the disappearance act; Lamar is actually pulling the plug on his marriage. He won’t go to rehab and Khloe can’t have addict around her or her family.  He knew the deal and instead of getting a statement to the public about rehabilitation for the usual “stress and relationship” crap everyone sees pictures of moving trucks. Wow!

Now Khloe is hiding her ring finger and although it hasn’t official confirmed it’s really only a matter of days now. Certain sources have claimed that Lamar wants to fight for Khloe and how he broke down in tears of shame. Well here’s a bit of news: A grown man can’t save his marriage by crying over his mistakes. He can either fix them or stop trying to guilt trip the wife he supposedly loves into taking back a crackhead. If all he could do was cry then no wonder Khloe is hiding her finger. She did out of shame.

Khloe Kardashian going to the gym in Los Angeles, California on August 31. Khloe is hiding her wedding ring finger because she the ring is off!