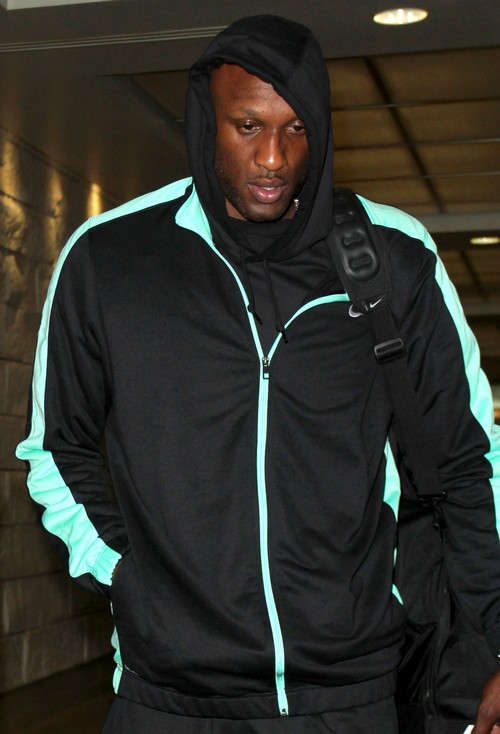 Lamar Odom is still trying his best to hang on to his marriage with all his might, even if it requires him to make some unreasonable demands. According to a new report from the National Enquirer, Lamar is giving Khloe Kardashian two conditions for the divorce: he gets $10 million in settlement money, and he gets his $875,000 wedding ring back.

A source explains according to Radar Online, “Kris [Jenner] and Khloe are very worried about Lamar. He’s a loose cannon, and he has a  lot of dirt on the family and nothing to lose. He knows all about their extreme surgery procedures — when, how often and  how much — and the pressure put on the younger girls to follow suit.”

The source also adds that Lamar is not going to be very cordial if the divorce goes through, explaining, “Lamar is also prepared to destroy Khloe’s reputation by discussing their sex tape, and how she targeted him and tore his family apart. Kris is insisting on a confidentiality agreement to ensure Lamar can never discuss his life with the Kardashians either in print or verbally. He’s not signing anything until they cough up the dough.”

Blackmail – an age old tactic that almost never fails. Right now, he’s only scared of losing his marriage when the Kardashians have a lot more to lose. Will Khloe go through with the divorce, knowing what’s at stake? $10 million is a lot of money, and it’s not like Khloe’s or the Kardashians’ reputation is all that pristine to begin with. Nothing Lamar reveals would come as a surprise to the public, although it would generate a ton of publicity.

What do you guys think? Do you think Lamar would make such outrageous demands, knowing that it might ruin his chance of getting back together with Khloe? Or is he making these demands because he doesn’t want to go through with the divorce? Let us know your thoughts in the comments.

Lamar Odom arrives on a flight at LAX airport on November 27, 2013 in Los Angeles, California. While Lamar escaped the east coast just ahead of a huge winter storm, another potential storm may soon be in his future… that is if he’s spending Thanksgiving with estranged wife Khloe Kardashian and the rest of her family!