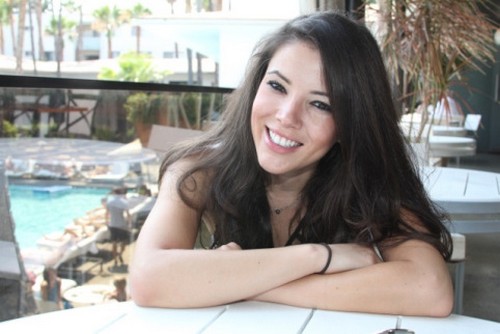 Khloe Kardashian dragged a crack smoking and paranoid Lamar Odom out of his mistress’ hotel room, according to the mistress herself, criminal defense attorney Polina Polonsky! Once Khloe got her wasted husband home she texted Polina in a jealous rage from his phone – calling his girlfriend, “groupie, junkie, crack head,” all the while pretending to be Lamar.  Pathetic on Khloe’s part, trying to blame the girlfriend for her own failed relationship and Lamar’s drug abuse.  As if Polina was the cause of anything – and not merely one of the dozens of women with whom Lamar has cheated.

We reported this story a while back on Celeb Dirty Laundry, minus the crack smoking allegations, and now TMZ has tracked down Polina and will show an interview with the attorney on TMZ Live later today.  A slice of that interview can viewed in the video below. Polina is totally going to expose every dirty detail about Lamar AND about Khloe.  There is no way that Kris Jenner is going to be too happy about this publicity!  It’s one thing when sites run stories about ‘poor Khloe’ and her degenerate former NBA husband but it’s something else when the intelligent and pretty mistress of that husband gets to say her piece on TMZ.

How can Khloe not file for separation and divorce after this?  What woman can stay married to a guy whose mistress is humiliating her on national TV?  There is no doubt at all about the veracity of Polina’s story – the woman passed a lie detector test and has been all over the tabs, with pics  to back up her tale, for the past month.

Now Polina has outed Lamar for smoking crack and taking other drugs in her presence.  I kind of think Polina was pretty classy about her handling of this sordid affair.   She kept her mouth shut about the drugs before the story about Lamar’s crack smoking hit the web.  At this point there is no longer any reason for Polina to keep quiet about anything – beware Lamar, beware Kardashians, beware Jenners – you are about to be exposed.  This is one story you won’t be able to work into your ridiculous reality shows.