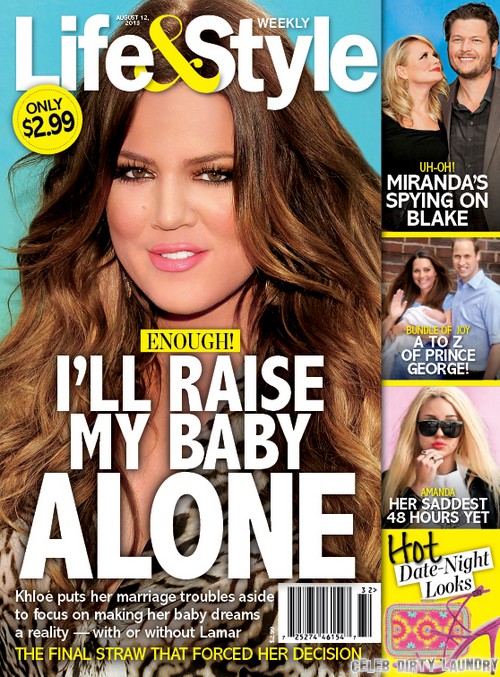 Khloe Kardashian now has her own cheating scandal to worry about. Lamar Odom’s mistress, Jennifer Richardson, has come out about their long affair with the Los Angeles Clippers player. Lamar’s mistress has sold her story to Star Magazine to exploit the NBA star’s affair. People have speculated about the couple having marital issues due to the reality show stresses, issues with Khole not being able to become pregnant, and tabloid tales as many blamed Khloe for Lamar’s declining basketball career.

According to Life and Style, August 12 edition, Khloe has vowed to keep her mommy mission alive, with or without Lamar. I would not be surprise if Momager Kris Jenner does not have a plan for a new show revolving around Khloe’s struggles with trying to have a baby. This family is all about money and Khloe is one of the favorite Kardashian sisters so capitalizing off her pain with her marriage and fertility issues would not be a stretch but very disappointing to say the least.

The ideal scenario for Kris would be for Khloe and Lamar to film their struggles with trying to have a baby but it appears Lamar might not be in the picture for that project. A single Khloe Kardashian attempting to be a mother would bring in just as many rating as the struggles of Khloe’s marriage. Personally Khloe’s fertility treatments being filmed should be a private matter but what is privacy when you are a Kardashain and money/fame is everything. This entire reality show for the Kardashian has done them more harm than good.

Khloe, I am sorry to break it to you but what goes around comes around. Lamar was in a 10 year relationship with Liza Morales just four weeks prior to marrying you. Being a part of the Kardashian Klan was more important than being a devoted father to his two children (Destiny 14 and Lamar Jr. 11). Lamar cheated on his than girlfriend/baby mama Liza Morales for the price of fame and fortune and since you were not his true love his cheating ways never ended. Being a Karsashian does not mean that you run the world and Lamar and his mistress proved that when she exposed Lamar for his cheating ways.

Is Khloe a fool for believing a leopard can changes his spots? We are all for standing by our man but at what cost? Single or Married we believe Khole will be an excellent mom however share your thoughts with us?