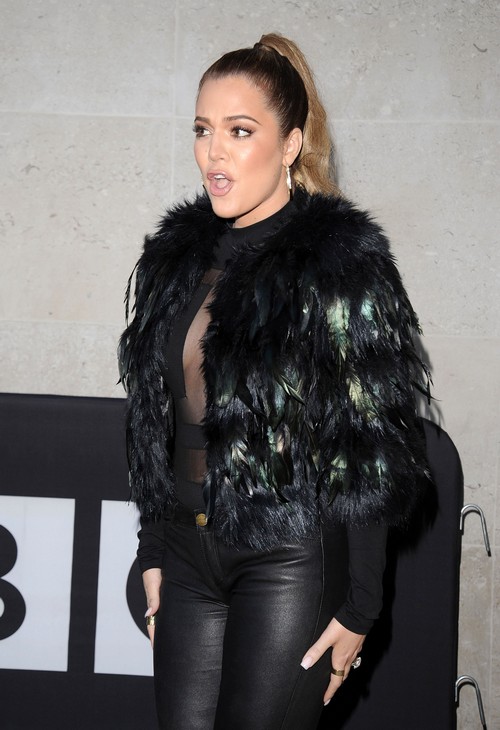 Sometimes, I wonder if the Kardashians WANT to be ridiculed. Or if their need for attention is so great that they’re willing to go to any lengths to gain it, even completely humiliate themselves in public. Because why else would Khloe Kardashian turn up at an interview in leather pants, a sheer top, and a ridiculous and feathery jacket? She looks like she’s just escaped from the circus, and not in a good way.

Right now, Khloe is in London ‘promoting’ the Kardashian brand, pimping out their ridiculous clothing and makeup line. She was set to be interviewed by BBC 1 Radio when she arrived, and I’m surprised they didn’t laugh her out of the studio. Well, I suppose they’ve had crazier-looking people in there.

You know what’s ridiculous about the outfit? Not only is it in all black, but it is completely unflattering. Her body proportions don’t suit skin-tight leather pants, and the feathery sweater/jacket thing just ends up drawing attention to all the wrong parts of her body.

Again, it’s Khloe, so I’m taking this about as seriously as I take anything regarding the Kardashians. Which is to say, not seriously at all. But it’s a bit offensive to the fashion world that Khloe is trying to sell clothing while looking like that. Isn’t it a cardinal rule that if you’re selling clothing, you look GOOD IN CLOTHING! Khloe looks hideous, yet there she is, claiming that the Kardashian clothing line is the new coming of fashion. Sure Khloe, whatever you say. Maybe you should fix yourself up before attempting to sell clothing to others, okay?