Khloe Kardashian Pregnant At Last! – Is The Game or Lamar Odom The Father? 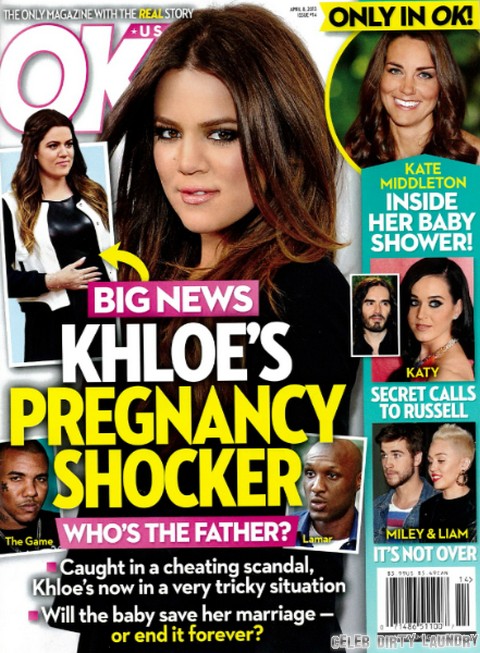 Is it bad that I’m happy to see Khloe Kardashian on magazine covers this week rather than her irritating sister Kim Kardashian? Anyway, you knew this was coming right? I’m talking about Khloe Kardashian’s spending extended quality time with The Game sending the rumor mill into crazy over drive. Last week we told you about how she had turned the tables on husband, Lamar Odom and as he continued to party with random strippers, Khloe opted to find comfort in other sources. One of those unexpected places was with rapper, The Game. They started out as workout buddies but a real connection apparently has grown and he sees her as the best Kardashian of the whole group.

An emotional affair between them pissed Lamar off, but probably not nearly as much as the rumor that Khloe is finally pregnant and unsure of who her baby daddy is. According to OK! Magazine, Khloe’s family keeps trying to reassure Lamar that the baby that they’ve been trying for years to have really does belong to him, but he’s not at all convinced and secretly, neither is Khloe!

Also inside OK! you can catch up on the status of some of Hollywood’s most messy relationships- at least for right now. Are Liam Hemsworth and Miley Cyrus over or not? I think it depends on the day of the week. He flew back to the states last week and the struggling couple supposedly spent quality time together. Miley has morphed into a totally different person since they first got together and he’s not sure he wants to be with the current version! He also wants her to grow up so I’m not sure that this week’s lunch date with ex-boyfriend, Nick Jonas, intended to make Liam jealous, is going to help things.

Would you believe that Katy Perry, fresh off of her split from the always womanizing Jon Mayer actually reached out to ex-husband, Russell Brand for advice? You’ll have to grab the latest issue to find out more!