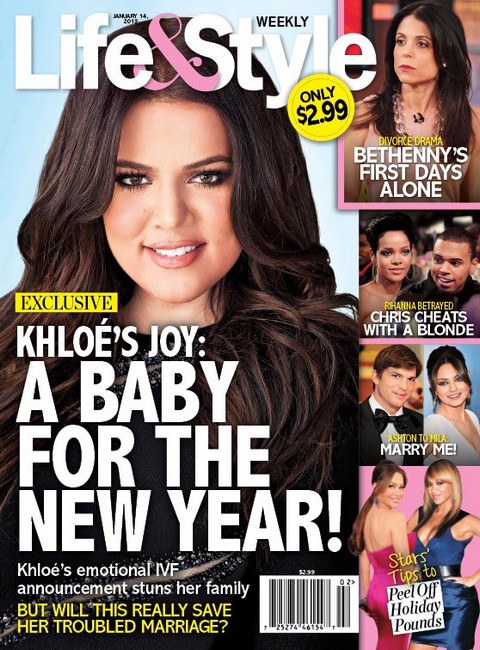 The latest cover of Life & Style magazine shows Khloe Kardashian’s horrid, half-smiling mug. The headline reads: “Khloe’s Joy – A Baby For The New Year.” What is this? Does the stork decide, “Hey, it’s New Year’s Day! Maybe I should fly over Hollywood and drop a few baby bombs on their heads?” Does a new year create more babies? Has anyone ever documented this? What’s the meaning of life? Oh, yeah, sorry, we got a bit lost in translation there. The bottom tagline reads: “Khloe’s emotional IVF announcement stuns her family. But will this really save her troubled marriage?” Well, last time we checked babies weren’t superheroes. It is possible that the baby might come out of her womb and play a Chopin piece on piano within five days of being born, but we highly doubt that – case in point: Bruce Jenner.

A source told Life & Style, “She wants to have a baby in hopes of saving their marriage. It’s so clear Khloé and Lamar are having issues, even if Khloé doesn’t want to own up to it.” Another source thinks a baby would be the best thing to ever happen to the couple, “If Khloé gave Lamar a baby now, she thinks it would really solidify them, it would create an everlasting bond. A baby would cement them.”

That might be about enough about the Kardashian with the mini-Kardashian in the big womb of doubt.

Bethenny Frankel’s post-divorce days are also discussed in the latest issue. She divorced from Jason Hoppy recently and is now as lonesome as a Roy Orbison fan at a tribute concert. This week, Rihanna is also betrayed, as Chris Brown sleeps with a blonde – nothing new there, so moving along quickly! Also, according to the magazine’s cover, Ashton Kutcher says to Mila Kunis, “Marry Me!”

Life & Style ends off its week of explosive news with a bit of lighthearted fun. In the bottom right corner is an image of junk in trunks (derrieres) with the magazine’s tagline: “Star’s Tips to Peel off Holiday Pounds” Most people need a quick fix after eating Turducken (a turkey in a duck in a chicken!), drinking eggnog while listening to Christmas Carols sung by lonely people, and sipping on more wine than their liver can process in a century.

It’s time to undergo a detoxifying cleanse for 2013, so jog – not walk – down to your local serial killer hangout and/or convenience store to pick up a copy to go.

Khloe Kardashian will hate you for not reading about her latest fame whoring expose.