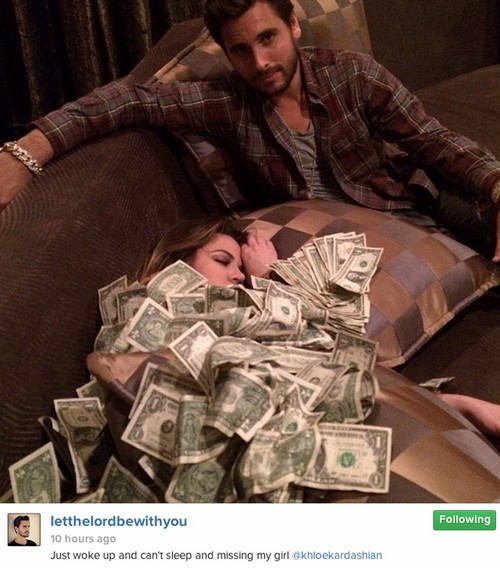 Scott Disick is quite possibly one of the most tasteless people we’ve ever seen, and that’s saying a lot considering he comes from the Kardashian household. He seems to have a penchant for stirring up controversy over the most idiotic actions, but is it rudeness or a general sense of idiocy that makes him do these things? Reciprocating what he’s done many times in the past, Scott uploaded a picture of Khloe Kardashian sleeping, covered with dollar bills.

He’s flaunted his wealth before, by uploading pictures of his toilet paper that actually used several hundred dollar bills. I mean, he was *literally* shitting on his money. It’s disgusting and crass, and it seems like he’s learned nothing from the backlash that incident generated.

Sure, this particular scenario isn’t as bad as that one. They’re only $1 dollar bills, for the most part, and they’re not on his toilet paper. But doesn’t any normal human being know that it’s considered tasteless to upload pictures of money, especially money draped all over another person? He’s basically flaunting his wealth to all of his poor, poor followers on Instagram, reveling in his own absurdity.

It’s completely inconsiderate, but I also think it just comes from a place of general dumbness. Scott isn’t one of the smartest people in the world, and backlash to him doesn’t mean anything. He probably thinks he’s the king of the world, based on the attention he gets and the fact that he’s a millionaire celebrity for doing nothing. When you live in that kind of privilege for enough time, your thinking becomes skewed. And let’s face it – Scott was no great shakes at thinking things through to begin with.

What do you guys think? Do you think Scott was trying to be rude and tasteless, or is he just stupid? Let us know your thoughts in the comments.