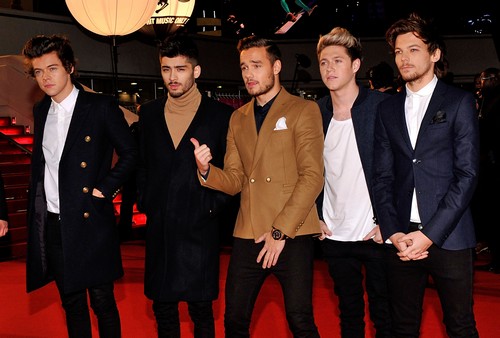 While Kendall Jenner and Harry Styles are both very attractive young people, the fact that they started dating did sort of come out of left field. According to a report from Heat Magazine, we can thank Khloe Kardashian and Nick Grimshaw for that.

A source tells Heat, “Khloe would love her sister to be dating someone who’s a bit more clean cut and has his own money. Khloe knows that Kendall loves One Direction, and she’s met Harry before and thinks that he’d be the perfect match for her sister.” Apparently, Khloe knew Nick Grimshaw decently well, and she asked him for Harry’s information, hoping that Kendall and Harry would hit it off. And hit it off, they did.

By and large, most of Harry’s fans seem alright with this news, probably because Kendall really doesn’t have much drama surrounding her, despite the fact that she’s a Kardashian [just give her some time]. However, Taylor Swift in particular is reportedly very unhappy about this pairing, with a source telling Heat, “Taylor’s not really letting it get to her, because she isn’t dating Harry. Jealousy isn’t setting in. She’s playing it by ear.”

I doubt that it’s not ‘getting to’ Taylor – anytime your ex dates someone new, it’s gonna sting a little bit. And re-create that situation in the setting of the celebrity world, and it’s magnified by a hundred. Of course, Harry and Kendall are supposedly doing their very best to stay undercover, even their efforts are failing miserably. It’s not a coincidence that the paparazzi manage to find them each time Harry stays over at Kendall’s hotel, but I don’t imagine Harry will catch on to that little fact anytime soon.