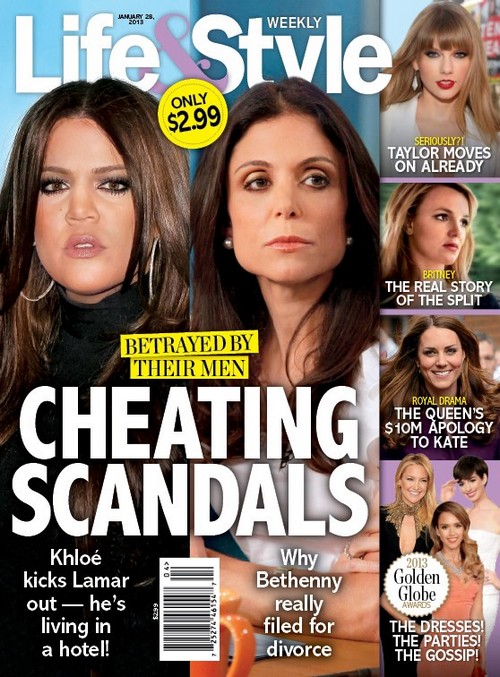 Another week, another Life & Style cover devoted to Kardashian family. The only difference this week is that Khloe Kardashian must accept co-billing with Bethany Frankel as they’ve both been “betrayed by their men”. In the battle of which reality star gets supremacy over whose supposed heartbreak is greater, we’ll start with the heiress of the KK Dynasty. According to the mag, Khloe has kicked Lamar out and he’s living in a hotel. There have been rumors going on for weeks that the two have been having marital trouble and have only been staying together to save face. But if the new living arrangements are true, Khloe is ready to have her face plastered on more covers in the grocery aisle as divorce from Lamar seems imminent.

Speaking of taking that call to lawyers, Life & Style claims to know the real reason why Bethany decided to end her marriage from Jason Hoppy. It’s because he is so religious and does not believe in divorce. “He took a vow and he’s going to keep it. So he’s still wearing his wedding ring and living in their apartment. He’s being very difficult — and it’s forced Bethenny to make the first move,” a source told the magazine. It sounds so simple and benevolent. We’ll see how much longer that holds out until he decides on his price to be a single man again.

Since Jason will be on the market again, he just may be the latest one for Taylor Swift. The tabloid teases that she’s moving on already after her breakup with One Direction star, Harry Styles. Taylor is not one to mourn the end of her relationships for too long but Britney Spears is pictured somber faced on the cover. The real details of her split with Jason Trawick are promised but it does not look good for our favorite Musketeer.

To perhaps include bit of happy news in their latest edition, Life & Style declares that Queen Elizabeth is giving Kate Middleton a $10 million apology. For what? You have to read the magazine to find out but most would be willing to let bygones be for that kind of serious cash.