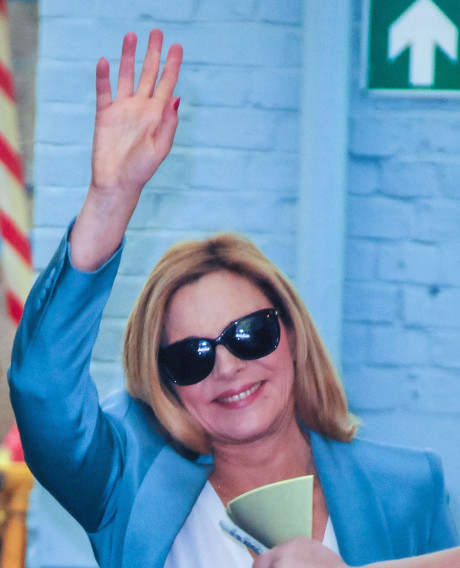 Did you catch any of The Carrie Diaries last season?  It was the prequel to Sex and the City and introduced viewers to a 16-year old Carrie Bradshaw in 1984. It was to introduce a whole new generation to Carrie while giving old fans a look at her teen years in a truly relatable way.  The reaction was a bit mixed with old SATC fans nit-picking at the shows history and new viewers kind of enjoying the ride.

Sarah Jessica Parker publicly admitted she wasn’t thrilled with the show but I’d imagine she kind of felt like her baby was swiped from her and left in the hands of a much younger — yet capable — actress by the name of Anna Sophia Robb.

Now, as it turns out there is one old SATC cast member that loves the new show, none other than the original Samantha Jones — Kim Cattrall. Season two of The Carrie Diaries is right around the corner and the character of Samantha Jones is about to be introduced as young Carrie’s new-found friend.

According to the Sept. 16th print edition of OK Magazine Kim is in talks to join the show as young Samantha’s mother, a move that no doubt be a welcome move by old SATC fans!  As of now nothing has been signed but Kim and the powers-that-be are said to be discussing potential story lines.

Would you like to see Kim return to the series even if it’s as Samantha’s mother? Were you a fan of the original SATC? Do you like the way the writers have handled young Carrie growing up in NYC? Tell us your thoughts in the comments below! Kim Cattrall on Carries Diaries: Plan Awesome or Plan No Thanks?