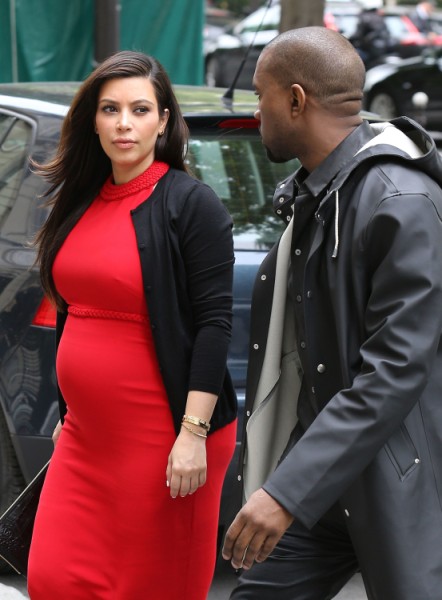 This woman cannot go a day without getting papped. Do you honestly think she wants to keep her kid away from the spotlight? Of course not! Because unlike Kanye West, Kim Kardashian knows that attention for the baby means more attention for her. It’s not the same with him. Kanye isn’t ready to be better known as so and so’s father. He already hates being called Kim Kardashian’s baby daddy! How the hell is he going to deal with it when the kid becomes more famous that him? We have another Suri Cruise on our hands and Kanye is no Katie Holmes. There is no back seat where he is concerned. Some might argue keeping his kid off Keeping Up with the Kardashians won’t change that. That baby is destined to be a celebrity but that won’t stop Kanye West from fighting the good fight anyway.

Radar Online reports that Kim might be changing her tune on allowing the baby to be featured on the show. Up until now she’s stayed pretty firm on the idea of keeping the baby away from reality TV because Kanye wanted it that way. But recent comments have people scratching their heads. She told The Times Magazine: “I love and enjoy seeing Mason and Penelope on the show. “But Scott and Kourtney are in the same business of reality television, so it works for them.” During the same interview, Khloe Kardashian cryptically added, “Never say never.”

I have a good feeling we are going to see that kid. The Kardashians are just trying to build suspense. Kris Jenner has learned a thing or two over the years. But where does this leave Kanye? He can either join the kid and make it look like one big happy family or stay away. That can’t make for harmonious living. He’ll probably see it as Kim choosing her family and her fame over him. How else could you see it? And he’s got that the world is against me chip on his shoulder anyway. This will be interesting to watch. If Kim Kardashian’s reality show baby makes its debut I’m going to call it as the end of Kimye. I just don’t see how that dude will be able to cope.