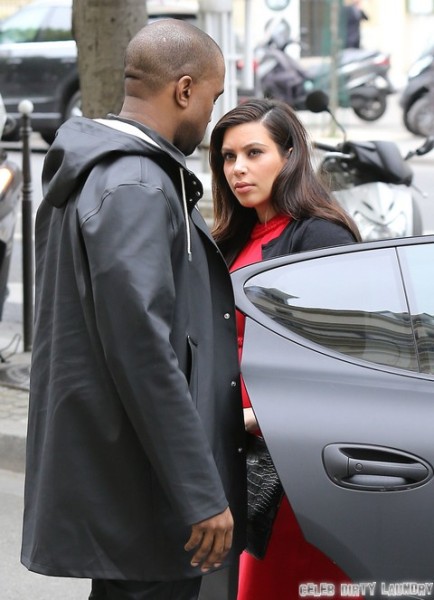 God damn these two don’t look happy together in Paris! Kanye West is taking lazer stare after lazer stare from his baby mama. Ordinarily I wouldn’t think it’s that big a deal. Sometimes people are just in shitty moods but you know Kim Kardashian called the paps to let them know she would be shopping on one of the most famous shopping streets in the world (why else dress like that?) so the least she could do was put on a lazy ass smile. What the hell is up with these two?

Kim, along with sister Khloe Kardashian, was supposed to be miserable while filming with her family in Greece last week. She was missing Kanye so terribly he send a plane to pick her up and bring her to Paris to visit him. Was the reconciliation not all is was hyped up to be? Did absence fail in making the heart grow fonder? Because if this is how they feel about each other after only being together a year and with no baby to get in the way yet then I’m SUPER nervous about their future. Who I am kidding? I was super nervous before.

Maybe I’m reading too much into this. Maybe Kim’s all sour because her dress is cutting off her circulation. Maybe Kim’s annoyed that she’s back in Paris. Maybe she’s annoyed that her sisters are creating a coup to become the hot Kardashian. Who knows? I’m sure we’ll find out in a couple months when the show starts back up again because that’s how she rolls. What we do know is she’s back in America now. Did Kim Kardashian leave Paris because she’s tired of running to her man or is it simpler than that? Did Kim Kardashian and Kanye West fight in the car before their blissful day of shopping? There’s a lot those two could be fighting about. Again, I’m not so sure about the future of that couple…. Little do they know… now is the easy period.