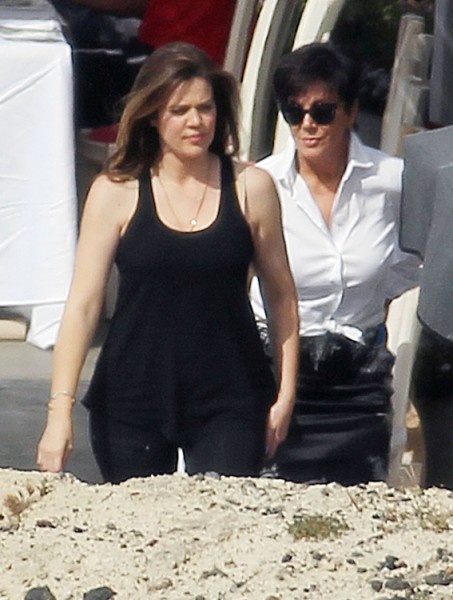 Khloe Kardashian sat down with British Cosmopolitan magazine and told a lovely story of when her mother called her fat. Kris Jenner really isn’t winning any mother of the year awards anytime soon, is she? I wonder if Khloe would tell the same story if she was 20 pounds heavier. Khloe’s on the cover bragging over a new svelte body so naturally she can dish about how it felt to be told she was fat. Funny how these stories are never uncovered when she’s yo-yoing back up the scale. I suppose anti-Kris stories don’t sell as well when the Kardashian girls aren’t looking their best!

“Now I’m getting older I feel sorry for her rather than resent her. (Once my mom told me) I was gaining weight, but she was talking to me as a manager, like I was ruining a brand deal.” she told the mag. “It’s hard to understand that and it’s more hurtful when it’s coming from my mom, but Kim is definitely her favorite. It doesn’t bother me. They’re so similar – they could be the same person.”

So, actually she’s defending her mother. That’s a nice first. Of course it’s wrapped in another slam as Khloe goes on to say that Kim really is her mom’s favorite so the woman really can’t win. It’s interesting to me though that Khloe brings us the brand deal. I’ve always thought the “momanager” thing was over-exaggerated and that Kris doesn’t push the kids to do anything they didn’t want to do in the first place. But basically by Khloe saying this it confirms to me that Kris really was all about the money in the beginning – all about the name – and I’m sure that hasn’t eased up since their fame skyrocketed. If anything, it’s probably only gotten worse!

What do you make of the Khloe Kardashian/Cosmopolitan interview? Were the Khloe Kardashian fat comments offsides or was she just being sensitive. I appreciate it when my mom tells me if I’m looking  a little chubby but I know she’s only telling me for my best interest – not hers. I’m not so sure Khloe ever does….