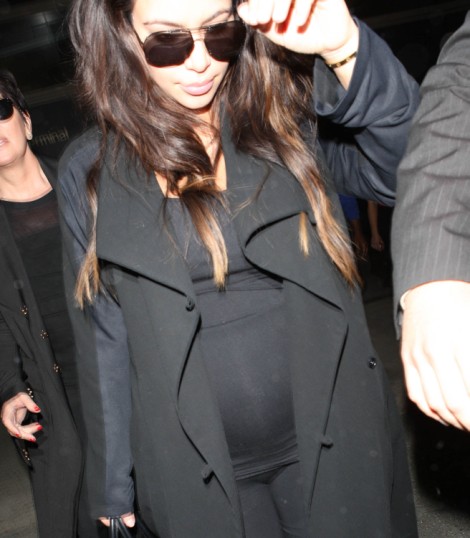 Kanye West is having a tantrum again only this time I actually agree with it. It was widely discussed that Kim Kardashian had sucked him into making an appearance at her baby shower this weekend but The Sun is reporting he’ll be a no show. He won’t even stay in the same country when she comes to “work” why the hell would he voluntarily go to a baby shower for the woman? Yes, it’s his baby too but he seems way over that at the moment.

He’s playing the anti-celebrity card again. “Kanye wants their life with their first child to be out of the public eye. He would like the baby shower to be the first part of that, so doesn’t want to be there while the cameras are rolling,” a source said.

Then why doesn’t he stop it? He knows it’s being filmed. He knows Kris Jenner orchestrated it. Where’s the big mystery? Why throw a tizzy this late in the game? Because Kanye reserves the right to throw a tizzy whenever her feels like it!

I’ve got to think this is just drama for the cameras. I’m embarrassed to admit this but I remember there were shady happenings going on for Kourtney Kardashian’s baby shower too. Didn’t she and Scott have a fight right before and he wasn’t supposed to show but then he did and the cameras caught the happy couple reuniting? It was a feel good episode. And apparently Kris Jenner is recycling ideas. Kanye will end up showing up and the world will hug itself in glee.

That’s why this whole thing is fishy to me. This upcoming season will use the Kanye/paparazzi storyline so obviously Kanye has to be OK with that. It’ll showcase Kim crying over the pressure of trying to balance her relationship and her career blah blah blah. So is Kanye’s bitching all for show? Is he taking a cut of the money and leaving his dignity at the door? How can you join the Kardashian family without doing that?

What do you make of the Kim Kardashian baby shower? Kanye West will probably make an appearance and we’ll all know his bitching is for shit, right?