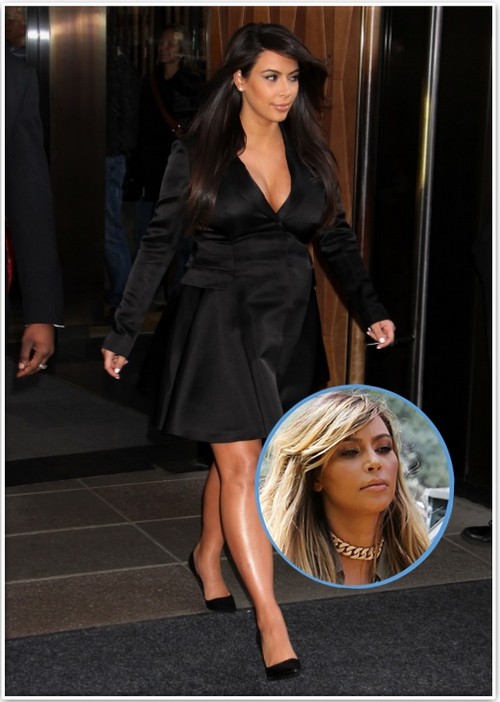 Anyone who thought that Kim Kardashian would ditch her famewhoring ways after the birth of her baby is wrong. Kim decided to prove why no one will ever replace her as the biggest attention seeker in Hollywood when she decided to go blonde, and conveniently get photographed immediately.

Of course, Kim’s colorist is trying to make it seem like a natural decision that she’s ‘always wanted to do’, explaining, “It’s something she’s wanted to do for a long time. I’ve been coloring her hair for a year, and she’s wanted to go blonder since the day we met.”

Please, she just wanted to hog the spotlight for a bit longer. Now that she no longer has a pregnancy to keep using for attention, and Kanye West won’t let her use North West, she has to resort to her body and her hair. There are already reports that Kim is thinking of posing for Playboy, but until then, here’s her blonde hair to tide over the paparazzi.

Obviously, nothing beats her sex tape, but she’s managing her image a lot more carefully now. As the partner of Kanye West and the mother to his child, she can’t resort to her past shenanigans and has to stick to photo ops with the paparazzi or changing her appearance. Trying to do anything else will invite the wrath of the Kanye, and nobody’s stupid enough to do that, even Kim.

So anyway, expect to hear about her hair for the next few weeks and then when that tides over, I’m sure Kim will come up with something else. She’s not exactly lacking in the media famewhore department.

What do you guys think of Kim changing her hair color to blonde? Let us know in the comments.