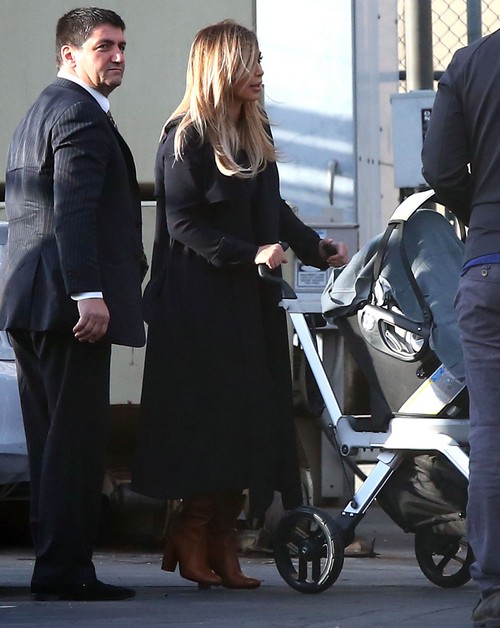 Stick a fork in the marriage of Kris and Bruce Jenner because it is done. Kris has moved on and is single and ready to mingle (although a ring on her finger never stopped her from mingling) with Todd Waterman (and any man who will give the aging momager the time of day), while Bruce is nursing his broken heart at his rented home in Malibu. The only thing holding up the execution of their divorce is the fact that there is no pre-nuptial agreement. Kris came into this marriage with nothing and Bruce was the bread winner so at the time she saw no need for one. Now mama Kardashian – who has even trademarked the term momager – has amassed a fortune valued at $125 million by pimping out her family, and she is not going to let it go without a fight.

So far the Kardashian/Jenner kids have remained unusually mum except for Kris’s son Rob Kardashian from her first marriage, and Bruce’s daughter from his first marriage, Cassandra Marino. Rob remained neutral telling Entertainment Tonight, “[Bruce has] been in my life since I was two years old and that will never change and same obviously with my mom…same with my sisters, there’s no bad blood, even between my mom and Bruce there’s no negative, bad blood…I don’t think they can be in a happier place right now.” Cassandra said that Bruce isn’t as happy about the divorce as Kris would have us believe, but that he is doing fine and that, “It was time for them to move on, I think this is a decision that they have not come to lightly.”

Likely it will be Kendall and Kylie Jenner – the two daughters they share – that will have the hardest time with the breakup of this always doomed union. Sadly feeling torn between their parents is just par for the course because besides the fact that Kris cannot help herself from sleeping around, a major point of contention in their failing marriage was the fact that they did not share the same values towards how to raise their two daughters. Kris figures who needs an education when you can use your body to make money, whereas Bruce wanted his daughters to remain at least somewhat grounded and continue to attend high school – you know so they could have something to fall back on when the Kardashian made empire falls like a house of cards.

Kendall and Kylie have yet to comment but they were seen playing golf with dad Bruce. At first glance this appeared to be a show of support for their father, but the Keeping Up The Kardashian camera men following them made it clear that this was just another day of work for the youngest Jenners.

We all know that Kim Kardashian will be team Kris because she is admittedly Kris’s favorite child and they could not be more alike. We also know that she thinks little of cheating or divorces – not just because of her own actions – but by her reaction to her mom Kris cheating on her father Robert Kardashian with Todd. Todd said in an interview, “Kimberley didn’t seem to mind.” If she didn’t care that her dad’s heart was being broken why would she care about Bruce’s – that’s right she wouldn’t.

In that same interview Todd said that the Kardashian child most affected by the affair between him and Kris was Kourtney. Although many years have passed since then, her mom’s affair that led to the breakup of her parent’s marriage, and caused her so much stress as a child remains an open wound. She appears to harbor some continued resentment towards her mom for causing her dad so much pain and has even said as much on KUWTK telling her mother, “I would never do that to my children,” and admitting that, “she is still hurting.” It cannot help matters that the same man who was involved with the breakup of her parent’s marriage is back in the picture. She will likely oblige and regurgitate some statement similar to her brother Rob’s because they are struggling to save the Kardashian empire, but behind the scenes we all know that she sees her mom for who she really is – an opportunistic harlot.

Khloe will no doubt be the most outspoken – even if it is just vague tweets. Or maybe not because right now she has bigger things to worry about like the demise of her own marriage to Lamar Odom. Actually Khloe and mom Kris could find themselves bonding over the fact that they are both married women who have moved on from their husbands.

They will likely present a united front because one thing this family has proven to be good at his manipulating the media through a carefully constructed façade. I am actually amazed that we are even still talking about them – shouldn’t their 15 minutes have been up 6 years ago!?! And to think this all started with a home-made sex tape. Thanks a lot Kim and Ray-J.